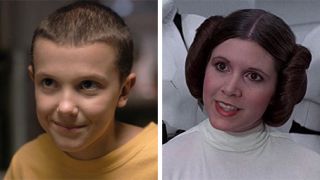 Millie Bobby Brown, aka Eleven from Stranger Things, has told crowds at Rhode Island Comic Con that she has a dream role in mind, set in a galaxy far, far away. Yes, you guessed it - she wants to play Princess Leia.

Eleven certainly called for some extreme performances, such as her flipping out in the testing laboratory and killing the Demogorgon in the finale, and Brown seems eager not to be typecast, but I wouldn’t exactly say General Leia Organa was “soft”.

There’s already a Han Solo movie on the horizon, so perhaps at some point Leia might get her own movie. If she does, the directors will know who to call.