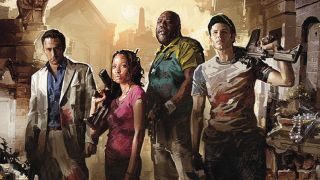 We've had plenty of zombie games since 2008's Left 4 Dead - and 2009's Left 4 Dead 2 - but none of them have ever quite matched the horror and humanity of the critically acclaimed co-op caper. That's why it's so exciting that Turtle Rock Studios is back with a new take on the co-op zombie shooter genre, Back 4 Blood.

"It’s hard to overstate what an awesome opportunity this is," said Turtle Rock's Chris Ashton. "We get to return to a genre that was born in our studio with over ten years of additional experience and zombie ideas racked up in our brains."

Turtle Rock has teamed up with the publishing power - and one would imagine deep pockets - of Warner Bros. for the project. "This is a great opportunity to work with [Turtle Rock] to create a new gaming universe built specifically with the large co-op zombie shooter community in mind," said David Haddad, president of Warner Bros. Interactive Entertainment.

This is just the first announcement on the game, so we don't even have one gory screenshot of a decaying corpse yet, but I'm still more excited than a zombie at a brain buffet. The Turtle Rock team has put together a pretty comprehensive FAQ though, which reveals the game will be initially developed for PC, Xbox One and PS4  - teases next-gen machines like PS5 and Xbox Project Scarlett versions - and will be a "premium, AAA title." There will be a campaign, there will be PVP, but it will absolutely not be a battle royale game.

"Back 4 Blood is our own brand new, original IP. You’ll be able to shoot up a lot of zombies like in Left 4 Dead, but there’s a whole lot of new stuff in Back 4 Blood which makes it unique," says the FAQ. "We are going back to our roots and at the same time innovating on them. We know we have some big shoes to fill, but we’re going all out to surpass everything we’ve done before."

"We are not resting on any past laurels. Our goal is to take all we’ve learned and push forward. We know that’s a tall order," added Turtle Rock's Phil Robb. "We’re growing the team considerably because we’re stepping up to the biggest challenge in this studio’s history. We know this title has to stand out and we fully intend to make that happen."

Sounds like it could be a wait for Back 4 Blood, so check out the 10 best zombie games you can play right now.