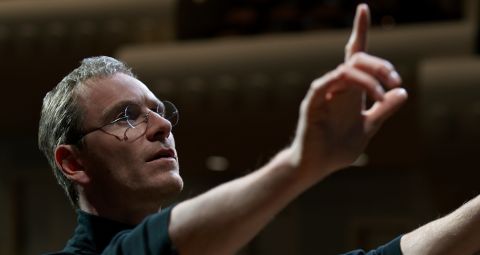 I don’t want people to dislike me. I’m indifferent to if they dislike me,” says Jobs. Well, this won’t be for everyone but it dazzles. Markedly better than Ashton Kutcher’s Jobs…

Machine-gun written by Aaron Sorkin and directed with controlled gusto by Danny Boyle, Steve Jobs possesses a three-act structure, but don’t for one second think this is a typical Hollywood movie.

The three acts here are each focused around a major technological launch – the Macintosh in 1984; the NeXT computer in 1988; and the iMac in 1998 – and shot primarily in real time, with Jobs (Michael Fassbender) ricocheting between Apple’s Head of Marketing Joanna Hoffman (Kate Winslet), co-founder Steve ‘Woz’ Wozniak (Seth Rogen), CEO John Sculley (Jeff Daniels) and system software developer Andy Hertzfeld (Michael Stuhlbarg).

Also on hand is ex-girlfriend Chrisann Brennan (Katherine Waterston) and her daughter Lisa (played at the ages of five, nine and 19 by, respectively, Makenzie Moss, Ripley Sobo and Perla Haney-Jardine), whom Jobs denies fathering despite a pretty conclusive blood test and obvious physical resemblances.

“It’s like five minutes before every launch, everybody goes to a bar and gets drunk and tells me what they really think,” says Jobs, and how you respond to that on-the-nose statement should tell you how you’ll get on with this fast and furious biopic. Truth and storytelling conventions be damned – as befits a project about a rampantly egocentric, bullying, brilliant, monomaniacal, maddening, visionary being, Steve Jobs makes its own rules even as it collapses timelines, jettisons chunks of history (Pixar, anyone?) and flagrantly flaunts its artifice. Either embrace the genius or know where the door is.

Act One is set in the De Anza Community College, Cupertino, California, Jobs in meltdown because he’s lost a cover of Time magazine – a result of the paternity issue being made public, he feels – and the Macintosh refusing to say “Hello” to the waiting audience. Hertzfeld, charged with conjuring the on-screen greeting, feels the full force of Jobs’ refusal to settle for anything less than perfection, while Chrisann wants to know why she and Lisa are on welfare when Jobs is worth $441m.

Act Two takes place at the San Francisco Opera House, Jobs having it out with the visiting Sculley as to why he was let go by Apple – a boardroom decision we’re made privy to via judicious flashbacks. Jobs knows that his overpriced NeXT computer, designed as a perfect black cube, is doomed to fail in the marketplace, but also knows that Apple will have to buy his operating system and reopen its doors to him.

Act Three, set at San Francisco’s Davies Symphony Hall, hails the return of the prodigal son, with the iMac announcing the next era of home computing just as the internet takes off. So why is Jobs refusing to pay $25,000 for his daughter’s tuition, and why must he still refuse to credit Woz, whose electronic engineering is the cornerstone of the company’s success, or the team that built the pioneering Apple II?

As written by Sorkin (who of course tackled another tech genius, Facebook co-creator Mark Zuckerberg, in The Social Network) and acted by a never-better Fassbender, Jobs is as much arse as genius, repeatedly using and abusing all those about him and so self-aggrandising as to compare himself to Stravinsky, Caesar, Picasso, Dylan, DiMaggio and, yes, god.

There are glimmers of decency, especially towards the end when Sorkin and Boyle perhaps realise they’d better give audiences at least a hint of humanity to reward their investment. But this is unafraid to alienate as it assassinates. The guff about Jobs being adopted as a child, and therefore out of control of his own life, thus resulting in all this monstrous over-compensation, feels half-hearted. What was it Welles said about Rosebud in Citizen Kane? Dollar-book Freud.

For the most part, viewers are invited to form their own opinions from the whirlwind of information. Perhaps such callous single-mindedness was essential to Jobs bestowing us with such gifts? Or perhaps, as Wozniak says, “You can be decent and gifted at the same time.”

Whatever you leave with, it won’t be your breath. This is brazen, bravura filmmaking, with Boyle corralling a clutch of terrific performances while taming his own often-ostentatious style for fear of getting in the way of the words.

Comprised of mainly interior shots and with each segment shot on different formats – 16mm for 1984, 35mm for 1988 and digital for 1998 – it’s a backstage musical of sorts, jumping and jittering to the rhythms of Sorkin’s incessant patter and propelled still faster by Daniel Pemberton’s wall-to-wall score: percussive beats, computer bleeps, orchestral swells. This is a movie that never lets up or allows viewers to do anything but meet it with fearsome focus. Much like its subject.

I don’t want people to dislike me. I’m indifferent to if they dislike me,” says Jobs. Well, this won’t be for everyone but it dazzles. Markedly better than Ashton Kutcher’s Jobs…