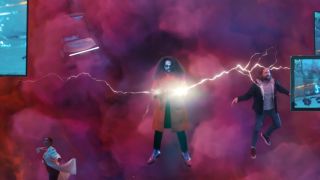 Google Stadia, the tech giant's leap into the world of big gaming, has officially launched. If you've been following it at all you probably remember those early presentations promising a cornucopia of games, the ability to leap into your favorite adventures straight from a YouTube video, and the tantalizing idea of playing blockbusters on your phone under your desk.

Now it's actually here, well, it's pretty clear that the launch-day reality is a little different from the promises that were made – you can learn all about that in our Google Stadia review in progress. If you're thinking of purchasing, or are still wondering who and what Google Stadia is for, here's a breakdown of what features actually made it in time for launch, and which are getting a tardy slip.

Here are the games available on launch day:

Not a bad list, but not one that will satisfy gamers who already own a console, and who will have played Red Dead Redemption 2, Assassin's Creed Odyssey last year and Rise of the Tomb Raider in 2015. Only Gylt is a Stadia exclusive.

But on the plus side, Google added almost half these titles at the last minute, so actually over delivered on what it had originally promised. One point to Gryffingoogle.

Google's big pitch at reveal was very much centred around the ability for you to play your games on any device, whenever and wherever you want – that's what the power of Stadia would bring to our lives. Would it surprise you to learn that Stadia has in fact brought very little of this to our lives, for launch at least. Google has decided to keep it all in the family, with mobile phone support limited to Google Pixel phones and ChromeOS tablets at launch, while those looking to stream Stadia  through a Chrome browser will find that gameplay won't support 4K, HDR, or 5.1 Surround Sound.

As for your iOS and other mobile devices, there's hope, but not for a while.

"Truth of the matter is that we want Stadia to run on every screen eventually. Android and iOS and whatnot. We're starting with Pixel this year. Hope to learn a bunch, make it great and start expanding to more devices next year."

On top of the, the Chromecast Ultra units included in the Founders bundle will work with Stadia on day one, but any others you already own won't. They'll need an update that Google says will happen "soon after launch."

There's no denying the Google Stadia controller is nicely designed and feels reassuringly weighty in your hand. The idea of carrying it with you and whipping out a tablet for some on the go Destiny 2 grind is certainly tantalizing. The catch? The controller is only wireless in one very specific circumstance at launch.

"At launch, wireless play with the Stadia Controller is only available on TV using a Chromecast Ultra," Google clarified on Reddit's official Stadia subforum.

At the Stadia GDC 2019 announcement, Phil Harrison showed a clever little feature that allowed players to watch a trailer – in this case, Assassin's Creed Odyssey – click a button, and be able to seamlessly start playing the game.

"By simply clicking on that button, the player is brought directly into the game, in a browser, in as quick as five seconds, with no download, no patch, no update, and no install."

As yet, this feature is not enabled. And, given that Google Stadia requires players to purchase individual titles – rather than running a subscription service – it's difficult to see how this functionality could be implemented.

Also at the Stadia GDC 2019 announcement, Dylan Cuthbert, president and managing director of Q-Games took to the stage to reveal State Share, a feature where you could use a simple link to share a moment in a game, so other players can jump in at that exact point. That might include world state, your inventory, or where you are in the game.

Q-Games are working on a title specifically to take advantage of the feature, but there's no sign of it at launch.

"The games that support State Share and Crowd Play will be released next year." said Andrey Doronichev, Stadia’s director of product.

One of the more niche features, it promises to be split-screen 2.0, allowing players to pull up, say, a squadmate's stream in the middle of a game. "With stream connect, we're making it possible to realize split-screen multiplayer without any performance penalty," said R&D lead designer Erin Hoffman-John during the Stadia GDC 2019 announcement.

"What would happen to squad-based games if developers could allow players to call up the views of their teammates on-demand or utilize any polygonal surface as a receiver for another player's video stream?

"Stream connect makes this possible with extremely little effort on the part of the developer, bringing dynamic, squad-based gaming into easy reach even for very small teams."

This is one feature missing at launch, but we could see it by the end of the year, according to Doronichev. Tom Clancy's Ghost Recon Breakpoint will be one of the first games to use the feature

Family Sharing of games "is not supported on day one, so you'll have to buy games for your child’s account," said Doronichev.

"But it’s a high priority feature, we’re planning to launch early next year."

One of the perks of the Stadia Founders bundle is a Buddy Pass that lets you give a friend 3 months of a Stadia Pro subscription. You'll have to wait for this too, but not long, according to the AMA and Google product manager Beri Lee.

"You’ll get your Buddy Pass about two weeks after you receive your bundle, barring some unknown unknowns popping up."

Want to know how Google put together the technology behind Stadia? Then you'll want to read this in-depth making of Google Stadia feature from our sister publication, Edge Magazine.