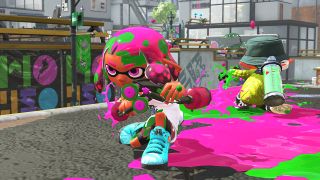 You're a kid now, you're a squid now... And by "now," I mean you will be a squid and a kid when Splatoon 2 for Nintendo Switch launches on July 21. If you're the collecting type, you'll also be happy to hear that a new set of amiibo featuring Inkling Girl, Inkling Boy, and Inkling Squid will arrive alongside the game.

Nintendo revealed during its Nintendo Direct presentation today that in addition to the usual competitive modes that fans have come to know and love, Splatoon 2 will also feature a 4-player, co-op horde mode called "Salmon Run." Apparently those octopi from the first game aren't the only aquatic lifeforms making a mess, and you need to defend yourself from waves of approaching Salmon. Yeah, it's weird, but it's also cute, so I'm down.

Check it all out in action below: