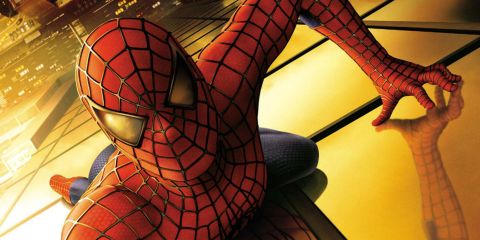 Full of swinging action but finding plenty of time to explore the people behind the masks, Spider-Man is a franchise with real legs. At last, a blockbuster that lives up to the hype.

Chaperoning the world's favourite arachno-man out of Development Hell and onto the big screen was never going to be easy. But Sam Raimi's done it with gleeful style. Pulling off one of the most hotly anticipated page-to-screen transitions in years, he's created a faithful, pacey and witty movie that far outshines most recent franchise-launchers.

Taking its time to unspool the silky story of Peter Parker (Tobey Maguire), David Koepp's script gives us a decent introduction to the geeky high schooler with an all-consuming crush on girl-next-door Mary Jane Watson (Kirsten Dunst). Then a nip from a genetically engineered eight-legged beastie transforms Parker into a muscled marvel with the power to climb walls, leap between buildings, sense danger and shoot mighty webs from his wrists.

At first the needy teen exploits his new skills selfishly. Eager for money, he enters a wrestling match against psycho Bone Saw McGraw (ex-WWF wrestler `Macho Man' Randy Savage) and, naturally, tries to impress MJ. But when his refusal to stop a thief at the wrestling pit leads to murder, Parker finally understands that his destiny lies in helping the helpless. Yes, kids, as Uncle Ben (Cliff Robertson) says: ""With great power comes great responsibility"."

Maguire deserves all possible kudos as the man behind the mask. His Parker is a beautifully rendered everyspod. After all, this Spider-Man is no fully-formed, right-out-of-the-box superhero à la Michael Keaton's Batman - - he's a kid struggling to come to terms with his new life, an adolescent undergoing a particularly severe puberty. He is, in short, the kindof fleshed-out character that demands to be played by a thesp with real acting chops. Maguire, of course, is just that man, ensuring you accept every turning point - - from the emotional twang of his early personal tragedy, to his frustration at not being able to instantly master web-spinning. Kirsten Dunst is likewise effective as Mary Jane, who finds herself attracted to the mysterious wall-scuttler after he saves her life. A popular but confused teen who's trying to escape her oafish father while defining her life by the men she dates, MJ is vulnerable, caring and very sexy. It's easy to see her appeal.

And, as a suitably strong counterpoint to the sickeningly talented `kids', there's Willem Dafoe as Norman Osborn, a workaholic scientist who's driven to desperate measures by the military's threat to pull his funding. His solution? To act as a human guinea pig for a not-quite-ready body-enhancing gas. The untried formula warps Osborn's brain, splitting his personality in two, between regretful family man and devilishly vengeful villain The Green Goblin. Admirably, Dafoe resists the temptation to take the money, munch the scenery and run, opting instead to fill in the broad lines with real humanity.

It's a shame, then, that for long spells Dafoe's emotive scowl is concealed behind a duff plastic mask, which sits atop a techno-monstrosity that wouldn't look out of place swapping laser breath with a rubber Godzilla. And, while we're dealing with disappointments, some of the early scenes of the red-and-blue hero swinging and running are comprised of shoddy matte work and/or an alarmingly dodgy CG-stuntman.

Don't worry too much, though: the major problems are soon ironed out, and subsequent clashes between Gobbo and Spidey range from effective to incredible. What's more, for once it's not the effects that are the main selling point. Dialogue, plot and characterisation - - normally the starving children at the blockbuster banquet - - are all well nourished here, with personalities developed as they drive the plot. There's even a final scene between Dunst and Maguire that displays a maturity long since banished from the Event Movie table.

Some Spidey fans will find things to whinge about despite the fact that Koepp's screenplay sticks closely to the comic book. But let's face it, with something this iconic, you couldn't drop a heroine from a skyscraper without hitting a gaggle of geeks ready to point out tiny infractions. Well, let them moan. The rest of us can celebrate the news that Raimi, Dunst and Maguire are already signed for the sequel, which, together with a record-breaking $114 million US opening weekend, makes Spider-Man's future look very rosy. Now all they have to do is bar Joel Schumacher from the Columbia lot...

Full of swinging action but finding plenty of time to explore the people behind the masks, Spider-Man is a franchise with real legs. At last, a blockbuster that lives up to the hype.