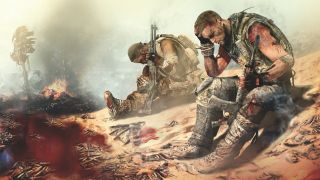 Shooters can be many things; ‘haunting’ is rarely one of them. Yet Spec Ops: The Line is exactly that. Dubai is the setting, its sparkling skyscrapers standing vacant after a series of sandstorms drove the more moneyed inhabitants out. Into this ghost city step Captain Martin Walker and two squadmates, initially on a mission to confirm the existence of survivors and get out. Increasingly, they find themselves drawn to pursuing Colonel John Konrad, commander of the ‘Damned 33rd’, a rogue US Army battalion holed up in the city.

Writers Walt Williams and Richard Pearsey were both fascinated by Joseph Conrad’s novel Heart Of Darkness (on which Apocalypse Now, just as big an influence, was based). Spec Ops’ ‘line’ is the invisible bracket that separates ‘in’ from ‘sanity’. Williams and Pearsey coax you back and forth before, without your even realising it, shoving you deep into disturbing territory and erasing the line behind you.

As a cover shooter, it’s a straightforward experience. Squad- based commands create a little space for tactical flair, and the sand plays its part, kicking up in blinding clouds after a grenade blast or sweeping in as the winds pick up. It’s the set-pieces that really allow Williams and Pearsey’s vision to strike home.

One moment, in particular, inverts the whole notion of playing the hero. Following reports of the 33rd torturing CIA agents and attacking other soldiers, Walker flouts orders and gets involved with the conflict. He thinks he’s serving the greater good, but he isn’t armed with all the facts.

Taking the chance to ambush a group of enemies, Walker mans a mortar emplacement overlooking a plaza. Through the targeting camera you can see where the 33rd troops are, and further back, where civilians are clustered. You launch a volley of shells at the lower, enemy-heavy part of the area. And then you watch as the carnage spreads to engulf the civilians, because what you just dropped was white phosphorous, the self-igniting chemical agent that burns flesh to the bone.

As Captain Walker you tried to ensure innocent bystanders would be left unscathed. But the game pushes you, the player, just a little more than necessary with a gruesome scene. The game is about how your choices affect the story – but in this episode, you have no choice. You think you’re doing the right thing but, just like Walker, you’re making it all worse.

And so it continues, a trail of destruction mostly caused by Walker’s misguided mission. His grip on reality loosens the closer he gets to his target. Hours of intense firefights take their toll, Walker’s clothing and demeanour growing ever more ragged. The carnage is intentionally heavy, to ram home the sense of emotional detachment Walker increasingly feels. And when you do finally reach the story’s conclusion... well, let’s just say none of the four possible endings leaves you feeling especially dandy.

Five years on, Spec Ops: The Line still stands out. Can you remember what happened in Call Of Duty: Modern Warfare 3, out at around the same time? The trick Williams and Pearsey pulled off was to make you remember, when you didn’t really want to.