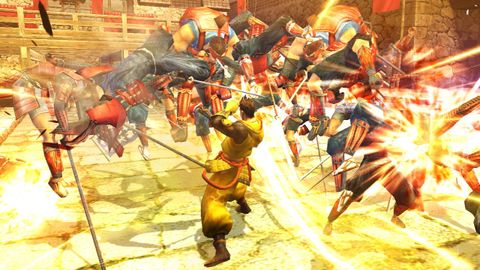 If you’ve never played a Sengoku Basara game, about two minutes in, you might come to the revelation that SB: Samurai Heroes is not just stupid, but offensively and unapologetically stupid. Sengoku’s got dangerous levels of cranial-injections-of-Novocain-type brain-numbing stupidity: stupid characters, stupid plots, dialogue, and repetitive gameplay.

Above: Capcom said these screens were good for the Wii as well the PS3 version. But we're not so sure the Wii can pull this off...

In fact, even the game’s premise seems to be more backwards than Fred Durst’s hat. One of the first characters you play through the campaign with wants nothing more than a unified Japan. So he single-handedly beats the turds out of every army’s trousers, be they friend or foe. For unity!

For the most part, each level is the same with a slightly different map. You choose who you want to fight, invade their kingdom, and take over various zones until you can reach the boss. Conquering zones is done by defeating the commanders of each zone. Levels are differentiated just enough to keep the gameplay from being too repetitive to be enjoyable: a horserace here, mini-boss here, but more often than not the game is just you running around stacking up ridiculously long combos against the insultingly easy henchman. Which, to be honest, is more fun than you’d think.

In fact, if you don’t count trying to make sense of the dialogue, the only difficult parts of the game on any difficulty level are the boss battles. Each zone usually has a mini-boss and a boss. Every once in a while, these bosses can knock your life pretty low, but it’s usually fairly easily avoided with the stacks of boxes with Japanese food lying around.

That is, until the very last battle, when there were five (Wait, seriously five?!) bosses, basically back to back (to back to back to back). Having been unwarned of this development, we were crushed by the fifth boss and sent to the very beginning of the long level. That’s right, there are no checkpoints here, folks.

But for all the whining, there is something dangerously addicting about the button mashing gameplay. The Wii gracefully keeps its waggle to a minimum, requiring a controller shake for only one move – your super duper move, called a Basara. Besides that, buttons are laid out in two ways, one for Nunchuk combo and one for classic controller combo. Both work fine, even after you’ve unlocked tons of moves. It doesn’t take long to level up your character to unlock each move, but if you want to earn your ultimate Basaras or unlock all the characters and get the full scope of the ridiculous story it’ll take multiple playthroughs. If you’re a perfectionist it could take a very, very long time to 100% each character’s story.

Luckily, the episodic style and ability for friends to hop in at random to play alongside you gives the game tons of replay value. Unlike most games with multiple campaigns (we’re looking at you, arcade fighters) each character in SB: SH has their own story, and the cutscenes are nothing to scoff at. However, half of the characters are far too annoying to play the entire game with.

Our suggestion? Turn off the volume, and get your fingers ready to mash some buttons.