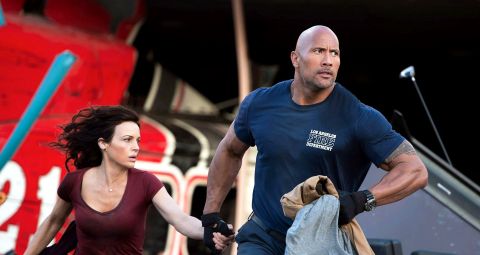 Less a Rock-buster than a quake’n’bake reheat of post-Emmerich basics. The cast’s likeable work falls right through the script holes.

More rubble than it's worth...

After Roland Emmerich totalled everything in 2012, is escalation still a viable option for disaster-blasters? If not, director Brad Peyton (Journey 2: The Mysterious Island) missed the memo.

While The Impossible (2012) proved that an up-close spin on the genre can flay the emotions, Peyton’s dutiful carnival of pixel-packing destruction is so dutiful that even a cruise-liner dive-bombing San Francisco draws little but been-there/done-the-trailer yawns. And for all his likeable-lug appeal, Dwayne Johnson isn’t exactly the John Cusack-ish grounding influence required.

The Rock is chiselled from old action stone as Ray, a rescue chopper pilot with emo-scars – that old faithful, a lost child. And just to twist the knife, his estranged wife Emma (Carla Gugino), with daughter Blake (Alexandra Daddario), is shacking up with a man who’s barely a man: Ioan Gruffudd’s Daniel doesn’t have kids or muscles like mutant melons, so he’s doomed long before the shit hits the San Andreas Fault.

After the first ’quake slams LA, a reunited-in-crisis Ray and Emma’s choppy quest to find Blake cues some cheerfully ludicrous set-pieces, from a rooftop rescue to a ’copter crash designed for rollercoaster 3D thrills (we saw in 2D). But the quest leans heavily on signposted ironies, rushed pacing and cheap get-outs: as Ray finds yet another conveniently placed vehicle to commandeer, it’ll be your groans making the earth move.

Like his chopper in one rescue scene, Johnson’s career is stuck in ‘HOV’(er) mode here, though he gets sturdy back-up from Daddario as his agreeably capable daughter and Australia’s Hugo Johnstone-Burt as her buddy-in-crisis, a comedy Englishman speaking authentic Hugh Grant-lish.

But that cheesy script, disaster-movie standard or not, does them few favours. No matter how hard the CGI huffs for a bigger second ’quake, it’s hard to get pulled in when, facing a 50ft tsunami, Johnson has to sell lines like, “I see it!”

Despite being sidelined in the wise scientist role, it falls to the over-qualified Paul Giamatti to speak the only salient words. “People need to know that we can predict these things now,” he says of ’quake threats. Lack of miraculous dog rescue aside, San Andreas holds no surprises.

Less a Rock-buster than a quake’n’bake reheat of post-Emmerich basics. The cast’s likeable work falls right through the script holes.