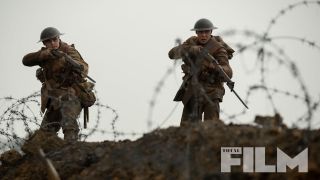 At the beginning of Spectre, there's a remarkable one-shot that sees Daniel Craig's James Bond walking through a Day of the Dead celebration. Directed by Sam Mendes, the scene blew many cinemagoers' minds with its astonishing choreography and cinematography.

Now, Mendes is going use what he learnt from Spectre to make a one-shot movie. Yes, an entire movie in a single shot! Set in World War One, 1917 will centre on George MacKay and Dean-Charles Chapman's young British soldiers as they traverse the terrifying French frontier. And, understandably, filming such an ambitious idea was tremendously difficult.

Speaking to our sister publication Total Film, the director revealed that “hundreds of takes – literally” were spoilt because of a forgotten line or prop that broke. “There were days when you were like ‘Why did I do this to myself?’” laughs Mendes. Take the moment MacKay's character Schofield encounters a woman holding a baby. “We got through this whole scene – five-and-a-half minutes of absolutely everything in the right place, just beautiful, and the camera operator tripped on the mattress. Total human error. And it’s like ‘No!!!’”

Fortunately, Mendes had MacKay leading the charge. “I don’t think I’ve ever met a fitter man!” says the director, who marvels at “the sheer degree of physical punishment” that the actor takes in a film that sees him battered, bruised and sodden after a dip in the River Tees. “He’s remarkable,” adds Mendes, comparing him to Hitchcock’s The 39 Steps star Robert Donat. “There is a dignity [to him]. He feels of the period.”

You can read the interview with Mendes, plus many more great features, in the latest issue of Total Film magazine, which reaches shelves on November 15.