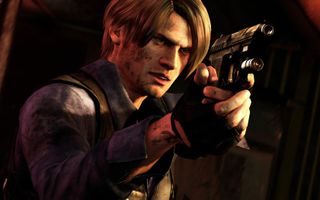 It’s all interpretation at the moment, but the phrasing of a recent Capcom financial review is suggesting big things on the way for Resident Evil.

The ‘Qualitative information and consolidated financial statements Operating results of the fiscal year ended March 31, 2016’ is a deeply, deeply unsexy title for anything, and most of it is numbers and pachinko. However, there’s this little nugget:

"In the fiscal year ending March 31, 2017, the Company is scheduled to release "Resident Evil Umbrella Corps" (for PlayStation 4 and PC) of the "Resident Evil" series, which marked its 20th anniversary in March 2016, as warm up to the full-scale offensive planned for the second half of the year".

There’s no way of telling what that ‘full scale offensive’ will be, but Resident Evil 6 was four years ago and that sort of talk does sound like more than another remake or spin off (unless it's a lot of remakes and spin offs). As ever for this time of year, let’s all look towards E3 and frown expectantly.