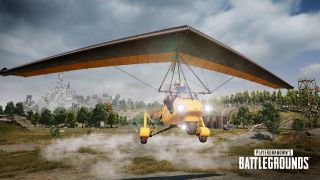 PlayerUnknown's Battlegrounds season 6 begins later this month, and developer PUBG Corporation has revealed more about the expected features coming to the battle royale game as part of its next chapter, all of which are now live in the PUBG test server on PC.

The big reveal is that a new map, Kakarin, will be hitting PUBG for season 6; a small island off the Northern coast of Africa designed for 64 players, and featuring a dangerous "Black Zone" which can change the entire layout of the terrain random hazards that can level buildings and force fighters out of hiding.

In addition, PUBG Corp is introducing a new explosive, the sticky bomb, and a new 2-man aircraft, the motor glider, both of which are exclusive to Kakarin itself. The sticky bomb can be used on defined breach points across the map to access secret areas and catch the enemy out by surprise, while the motor glider represents the first flying vehicle in Battlegrounds' history.

On top of all this, the battle royale game is launching a new, free battle pass progression system known as the Survivor Pass - a community focused set of challenges that can unlock access to in-game rewards and more lore about the history of Kakarin itself.

PUBG season 6 kicks off across PC and console on January 25 next week, but those on the former platform can try out all the newly revealed content for themselves now on the test server. In the meantime, you can read the full details about season 6 and more on the official PUBG website here.