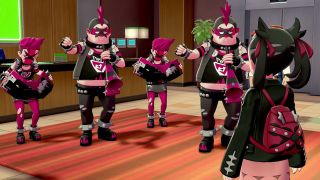 Bring back the good old days of Team Rocket, if you ask me. The new villains (if you can even call them that) of Pokemon Sword and Shield have been revealed and they're called Team Yell. No, it's not a crew of shoutcasters from an eSports competition, but instead a crew of fanboys and fangirls for another new character for the duo of Switch Pokemon games called Marnie.

All they want is for Marnie to become the Champion, and they'll do everything they can to come between you and your ultimate goal. They'll take over hotel lobbies, shout and distract opponents during battles, and also prevent challengers from accessing the transportation that will get you from A to B in the Galar region. Troublemakers, indeed!

Whenever you see Marnie, or she's battling, Team Yell won't be far behind. You have been warned.

As for Marnie herself, she's one of the rivals that you'll have to battle en route to becoming Champion. Her aim is just the same as yourself, and she's got tonne of fans - including Team Yell - who follow her because of her calm, calculated battle strategies and the fact she's pretty darn cool.

The latest Pokemon Sword and Shield info drop also introduced us to Bede, and he's already been endorsed by Rose, the chairman of the Galar Pokemon League. He too aims to become the Pokemon Champion, but from the sounds of his bio, he's got a few other objectives up his sleeves. Looks like a villain in the making to me.

We also got a glimpse at the new Galarian variants of classic Pokemon, including Weezing and Zigzagoon during the trailer, among other details. You can watch it all below:

Until Pokemon Sword and Shield arrive, why not try out these games like Pokemon to keep you busy?