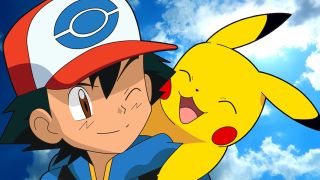 Pokemon Go is huge. In hindsight the idea was always a shoo-in. Real-world Pokemon hunting, using the standard-issue geolocation tech that the majority of the western world now carries around in its back pocket. But I don’t think anyone, not even Nintendo, would have imagined the level of gleeful, ludicrous, world domination it has secured in just a few days.

Businesses are stalling as staff drop their real-world jobs in favour of their preferred careers as Pokemon Trainers. Public spaces across the globe have taken on the countenance of Pokemon LARP events, streets and parks alike filled with players unashamedly stopping foot traffic in order to snag that just-spawned Jigglypuff. Organised meet-ups are drawing thousands of revellers sharing the fun of snagging a ‘Mon together. Pokemon Go has, with no hyperbole, influenced human behaviour on a vast scale, and it’s done so with almost no explicit coercion from Nintendo. It’s done so simply by existing.

The promise of augmented reality gaming has been around for years. The technology has, too. But why, despite many valiant efforts, has it never made a dent in popular culture, let alone captured imaginations on the scale we’re seeing now? On paper, AR is the ultimate, accessible, community gaming format. Anyone with a modern phone can get involved, and the simple novelty of video games invading the real world is a tireless source of nerdspiration. So why has it taken so long for the potential to be realised?

After all, Nintendo’s own 3DS - with its multiple cameras and 3D screen - was originally pitched very much around the idea, and its early software was designed specifically to leverage this stuff. But beyond the initial launch-window demos and minigames, the AR element rapidly fell by the wayside. And Nintendo wasn’t the only developer trying it. Most notable among the pantheon of brave AR games you’ve never heard of is an iOS and Android release called SpecTrek. It’s a ghost hunting game that places spooks at real-world locations via Google Maps, sends you out to a designated search radius to track your phantasmic quarry, has you scan to detect its type, and then ultimately catch it using an augmented reality view through your camera.

And before flooding parks, beaches, and landmarks of every flavour with eager, screen-tapping Trainers, Pokemon Go co-developer Niantic made a game called Ingress. Ingress is a global, GPS-based, faction war, sci-fi RPG, in which two teams compete for control of a series of portals aligned to landmarks and public spaces. There’s a levelling system, a currency to fuel the level of actions that are possible, and all manner of gadgets with which to erode your opponents’ control while maintaining your own.

Both of the above are clearly versions of Pokemon Go, but despite a healthy seven million players for Ingress, neither struck anything like the levels of mainstream traction we’re currently seeing.

So what has Pokemon Go got so right? Some have suggested that the choice of hardware platform is the reason for its success over Nintendo’s previous AR efforts. Lots of people have a 3DS – though there were admittedly far fewer in the market when Ninty’s early AR push was at its peak – but almost everybody has a smartphone. And while the 3DS has the camera tech required for AR, its lack of global positioning tech does rather limit its scope.

But that can’t be the sole reason. Both SpecTrek and Ingress are on mobile, as are a host of other, similar AR games that you’ve almost definitely never played. So is it the games’ design or quality? Is Pokemon Go just better? No, that’s not it either.

Objectively, Pokemon Go isn’t a brilliant game. That certainly doesn’t stop it from being fun or compulsive, because hey, check it out. Human behaviour, changed everywhere. But it’s arguably limited in scope in its current form, and rather oblique in its methods of tutorial. Equally – or better – featured AR games have existed for quite a while, without scoring anything like the same success. So there’s only one logical explanation.

Pokemon Go is huge because it has Pokemon in it.

I’m not being flippant here, or reductive, or in any way derisive toward licensed games. Quite the opposite. Because really, Pokemon Go is a fantastic case study in why licenses and repeat use of franchises can be a really positive thing, and genuinely healthy for the creative development of games. Whatever the traditional perception of licenses being a cynical way to print money from a low-grade photocopy of a popular property, in truth they can be the catalyst that helps more progressive and off-kilter ideas reach the audience they deserve.

The thing is, the combination of AR and Pokemon is a perfect storm of design and franchise. The dream of real-world, location-based game interactions is a flawless fit for the fantasy of hunting and training Pocket Monsters. It’s simple, it’s coherent, and it just works. Of course, you could say the same thing about ghost hunting, or a secret, occult war between opposing factions, but Pokemon is an established fantasy, ingrained in the public consciousness for 20 years.

After that amount of time, an idea goes beyond a mere reference to a particular media property, and becomes part of a civilisation’s cultural make-up, in much the same way that movie quotes, or TV and comic book references become universal, conversational shorthand, even for those who’ve never experienced the source material directly.

That’s the kind of elevated pop culture fantasy that Pokemon is now. That’s why Pokemon Go is huge. One can only imagine how much bigger SpecTrek might have been if it had launched with an official Ghostbusters license and a decent slab of hype, but it’s entirely feasible to speculate that the answer would be ‘Quite a bit bigger’.

Of course, a good game doesn’t necessarily need an established, mainstream franchise in order to be successful. But is it impossible to plausibly suspect that the excellent Bionic Commando: Rearmed might have reached a wider audience if it had been launched packing a Spider-Man license? And how many people, in the pre-Arkham days, didn’t play Splinter Cell imagining that Sam Fisher was Bruce Wayne? I know I certainly did, and I was in no way surprised when Rocksteady eventually hit a seam of pure gold by adding a cape and some verticality to Ubisoft’s gadget-laden, shadow-draped stealth model.

For all the criticism of shovelware exploitation – and to be clear, there is a lot of that around – this is why licenses and long-term franchise use are important. This is why Nintendo in particular pins every new game idea to Mario, Pikachu, Link or Samus if it can. Thematic links to established stories and characters translate new systems and ideas into something the audience can immediately make sense of.

The arcanery of a new or unexpected play-style, however fun or promising, needs to be delivered with an accessible in-route. Humans understand and relate through stories. They revel in familiarity and connect through shared knowledge. The simplest way to ingratiate the abstraction of a new experience is to embed it in an instinctively understood concept or narrative.

These culturally understood ideas fill in the gaps. They make designs make sense. They make designs mean something. Trying to persuade the archetypal player in the street of ‘a cool game where you use Google Maps to go and find stuff outdoors’ is one thing, but selling ‘real-life Pokemon hunting’ is a four-word no-brainer. What’s more, using an existing fantasy can easily smooth out any kinks in the final product.

With a pre-existing fictional ideal providing the anchor and focal point of the whole experience, the good parts of the experience are heightened and the less successful elements less conspicuous. Game systems are laid less bare than they are in other titles, experimental or otherwise, because everything, really, is there to support a higher goal than the mere nuts and bolts of the concrete product. Everything is there to support the fictional aspiration, and the realisation of that aspiration - even in abstracted terms - is ultimately what carries the overall experience. Everything else is a means to that end. Deliver it consistently enough, and you have success, whatever the details.

That, ultimately, is why Pokemon Go is on fire, while I had to research Ingress, having only heard of it in vague terms before Niantic stripped it down and covered it in magic electro-mice. Whatever the quality and scope of that earlier game, an obtuse tale of an oblique fantasy war was never going to turn a great concept into a great concept that people instinctively needed to play. Especially not one whose execution was so in-depth as to incite collaborative internet forums dedicated to solving its mysteries. There’s a big audience for that, but it’s not a mainstream one.

Licenses are not inherently a bad thing. ‘Over-used’ franchises are only truly over-used when they’re not being leveraged to elevate a good idea. But when it all comes together, with concept, franchise and player aspiration in sync, the supposedly cheap, tacky inclusion of a big brand can actually be the saviour that gives otherwise niche, creative progress the success it deserves to enjoy.