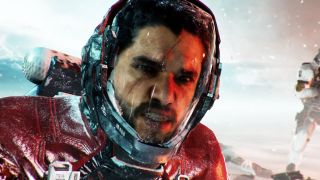 Watching trailers is one of the simple pleasures of being a video game fan. For 1-to-3 minutes we can turn off the critical-thinking portions of our brains, take in all the explosions and booming music, and willingly descend into promotional torpor. But often there's something, or many things, that are just a bit too familiar. Tired old tropes that we've seen a dozen times before. In the hopes of forever banishing these state-of-hype-zen dispelling cliches from the world of video game trailers, I've put together a list of the most frequently abused.

The slow, creepy version of an '80s hit song

You want to bring some established cultural capital into your game in an unexpected way that doesn't make it seem like you're trying too hard. I get it. But the appearance of downtempo '80s song covers in video game trailers has gone from "captivating" to "hilarious". As soon as I hear the first verse, or recognize a familiar riff played through a creepy ethereal filter, I instantly stop paying attention to your trailer and hit up the original song on YouTube instead. It's not a judgment on my part, Tears For Fears just has that power over me.

Cutting into and out of slow motion

Switching back and forth between real time and bullet time in trailers is supposed to let you appreciate all the cool action in finer detail, and to create a juxtaposition between hectic battlefields and elegant motion. Unfortunately, game trailers overuse the trick so much that it starts to look like certain parts are just inexplicably slower than the others, or that the trailer editor kept nodding off and hitting the "make it look cooler" button with their forehead. Everybody who isn't Max Payne needs to lay off the slow-motion toggle for a while.

If I can't flip and dive between soaring, ballista-propelled siege sidewalks in your game, don't put that in your video. We expect CGI trailers to exaggerate their subject matter's cinematic qualities since they're not actually made with the game itself, but there are limits. If your action-packed trailer doesn't stay somewhere in the neighborhood of in-game activities, it will just make the actual game look dull by comparison. And nobody wants that.

Back in the good old days, videos stopped playing when they were over. Now they keep going for another 20 seconds to tempt you with pre-order bonuses and - more importantly -  play faint music or other ambience just as soon as you tab over to hit "Play" on Spotify. There's got to be a way to promote your stuff that doesn't make the end of every YouTube video feel like that one friend who won't go home after the party's over and you just want to go to bed.

Teasing the True Threat for 1.5 seconds at the end

They already showed the title, but you know the trailer isn't done until you catch a brief glimpse of the Big Bad. Not too much! Just long enough so that the Wiki writers can grab a screenshot and start writing a character stub. This is a trick that's meant to be unexpected and memorable - a trailer version of the after-credits sting - but it's become so commonplace that it's lost all impact. Kind of like after-credits stings, come to think of it.

I can't believe I'm writing this in 2017, but trailers are still using the Inception sound. Not precisely the sound effect from the film, I'll grant you, but spiritual successors that delight in going from quiet to "BWAAAAAMP" are perhaps even more common now when that movie was still a big deal. It was a novel way to get our attention and aurally punctuate messages almost a decade ago, but at this point it's been tiresome far longer than it ever felt clever. Please, let the Inception Sound trumpet in peace back in 2010, where it belongs.

PLEASE STOP BARRAGING US.
WITH RAPID-FIRE TITLE CARDS.
TO MAKE IT FEEL LIKE.
THERE'S MORE STUFF IN YOUR TRAILER.
THAN THERE ACTUALLY IS.

Narrators who won't shut up

If your video can only get its point across with an unnamed narrator talking over every single scene, you may want to explore other options. It's a trailer, not a one-person podcast.

Imagine Dragons in everything

Put aside your personal feelings on the band known as Imagine Dragons, whatever they may be. I've charted the rates of their appearances in video game trailers over the last decade and have come to a chilling conclusion. We have two options: either we all agree to an armistice right now, or we resign ourselves to a future where all video game promotional activities are dictated by the Imagine Dragons single release schedule. We can still put an end to this.

One of GR+'s news crew, Connor also writes features from time to time and does a lil' streamin'-streamin' on the side. Chrom is his husband and nothing will ever come between them.
See comments