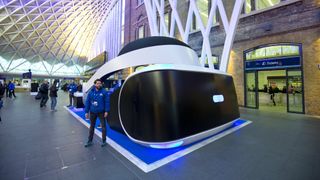 Tomorrow, October 13th, PlayStation VR arrives and everyone can finally disappear into the Matrix/Holodeck (delete as appropriate). To celebrate the arrival of the future Sony has built a giant PS VR headset in UK's King's Cross station because it has money and can do that sort of thing.

But! It's not just so you can pretend to be really, really tiny. It's actually a booth where people can have a go on the tech and play some games.

Come and play in our flipping massive #PlayStationVR. We're at Kings Cross until Sunday. pic.twitter.com/mNbYHHBIHyOctober 12, 2016

It's going to be there until the 16th so if you're in the area and fancy trying out PS VR you've got a few days to give it a go. In the mean time why not check out the best PlayStation VR games (so far) and a few more pictures of the giganto-headset.

#PlayStationVR is at Kings Cross, check it out if you haven't already its awesome! pic.twitter.com/uDU7J7y09GOctober 12, 2016