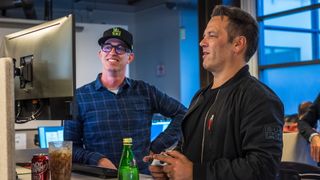 Update, February 5: The Initiative has teased another behind-the-scenes update about its unannounced Xbox game. The new first-party studio welcomed Xbox boss Phil Spencer back to its offices on Tuesday for a chance to discuss the overall direction of Xbox, as well as to share an image of Spencer playing The Initiative's mysterious new project.

We were fortunate to have @XboxP3 visit @TheInitiative yesterday to tour the new studio, talk about where @Xbox is heading, and - most importantly - get his hands on the sticks and experience the game in action! Photo credit @justinvgodzilla #gamedev #alwaysplayable #xbox pic.twitter.com/vLSAMEhjvcFebruary 5, 2020

Don't bother trying to see what the game looks like from the reflection of the screen in design director Drew Murray's glasses. We've already tried, and pretty much all we can make out is a glowing blue block. Still, glowing blue block confirmed?

Original story, January 29: Phil Spencer, the head of Xbox, has posted an update about a mysterious game that's being worked on by The Initiative first-party studio, and hinted at the return of an old Xbox franchise in the process.

In the tweet, Spencer mentions that the studio is doing "old things in new ways," which could be interpreted in a number of ways. Either the studio is working on an old first-party series and bringing it back to life, or the studio is using the experience of its industry veteran talent in "new ways. Fans have already started speculating about the possibility of seeing the return of franchises such as Perfect Dark.

Great update today with @DGallagher_LA @mattbooty and the team @TheInitiative. Incredibly talented studio challenging themselves to do new things things (and old things :-) ) in new ways.January 28, 2020

The Initiative was first revealed as a newly formed first-party studio during E3 2018 alongside news of third-party studio acquisitions joining the Xbox Game Studios line-up - such as Ninja Theory. The first-party studio is formed of a big pool of industry veterans, including the writer and designer of Red Dead Redemption Christian Cantamessa, God of War producer Brian Westergaard, and Tomb Raider and Rise of the Tomb Raider co-director Daniel Neuburger.

Studio head Darrell Gallagher is also an industry veteran who's has worked with the likes of Crystal Dynamics, Activision, and Square Enix, with Drew Murray of Sunset Overdrive and Ratchet & Clank also on board as design director. The Initiative's lead systems designer Sean Slayback was also a designer at Respawn, Treyarch, and Infinity Ward.

So far very little is known about the highly anticipated title The Initiative is working on, and nothing has been revealed since the studio was announced. Of course, the studio may well be working on a new IP entirely. Interestingly, the studio are still currently hiring for positions, with job listings calling for a variety of roles for programmers and designers who want to "dive into something new and create groundbreaking experiences."

Given the amount of veteran names working on the elusive game, the mention of "old things" could be referring to the idea that the studio's talent is putting their experience to use in new ways, but Spencer's little smiley face in the tweet does make it seem like he's teasing something.

Regardless of whether it's breathing new life into an old Xbox game or it's something completely new, it's exciting to hear that progress is being made. With the Xbox Series X on the horizon, it seems quite likely that this "new experience" will land on the next-gen console. Spencer recently confirmed Xbox will be attending E3 2020, so maybe this will be the year that we finally hear or see some small slice of news regarding this mysterious game from the new studio.

Looking ahead to the next-gen console? Here are all of the upcoming Xbox Series X games we know about so far.