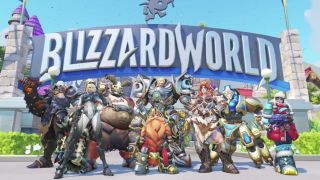 A new map and loot box items are coming to Overwatch next Tuesday, January 23, according to the game's official Twitter account. This isn't just any map and collection of skins though - this time it's all about the studio that makes Overwatch what it is: Blizzard. Welcome to Blizzard World:

First revealed at BlizzCon 2017, Blizzard World is a digital Disneyland-esque amusement park, with rides and attractions based on Blizzard games. There's a Siege Tank and giant pylon from StarCraft, a Hearthstone tavern, what looks like Tristram Cathedral from Diablo, a Heroes of the Storm-themed arcade, a World of Warcraft cart ride, and lots more. Seriously, the place is absolutely packed with references (and puns) to Blizzard's storied history. Though oddly enough I don't see any Blackthorne homages… Hmm.

While the Overwatch Twitter account technically only specified the release date for the Blizzard World map, game director Jeff Kaplan has previously stated on the Blizzard forums that loot box items will arrive alongside the new playground. Among said items are skins for Doomfist, Orisa, Reinhardt, Roadhog, Torbjorn, Widowmaker, and Zarya.

Immortal Orisa takes on the appearance of a Protoss Immortal from StarCraft:

Crusader Reinhardt looks ready to do battle with the Prime Evils:

Butcher Roadhog makes the famous demon from Diablo a bit scarier by giving him a gun:

Bronzebeard Torbjorn is going to inspire a lot of Warcraft Dwarf jokes - as if there weren't enough already:

Nova Widowmaker is basically just flipping the way Heroes of the Storm handled adding Widowmaker to its roster:

Barbarian Zarya is ready to lay the smackdown on demons and heroes alike with her Diablo-inspired appearance:

Mei also gets a new skin, though "Ecopoint Mei" isn't based on an existing Blizzard property and is instead inspired by what she wore in the "Rise and Shine" animated short from August:

I'm a pretty big Blizzard fan but terrible at Overwatch, so y'all enjoy shootin' each other - as for me, I think I'll just relax and take Nova Widowmaker on a stroll through the park. I wonder if they have a sports bar set up where you can watch the Overwatch League?