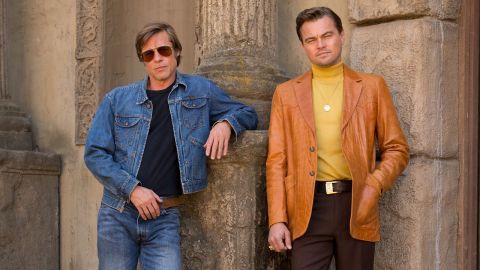 Tarantino’s ode to Hollywood is his best since Jackie Brown; an evocative and disarmingly heartfelt LA story, capped by a finale you won’t forget.’

The ninth and, if a long-held pledge is to be believed, penultimate film from Quentin Tarantino, Once Upon A Time… In Hollywood has been shrouded in great secrecy. So what is it? A love letter to late-’60s Tinseltown? The story of a fading actor and his stuntman? A restaging of the Manson Family murders? The answer is all of the above – dream territory for moviedom’s most cine-obsessed storyteller.

Our way into the pre-Manson world of 1969 California is via has-been actor Rick Dalton (Leonardo DiCaprio), and his stuntman/only friend Cliff Booth (Brad Pitt). Dalton was the star of a successful, Rawhide-esque TV show called Bounty Law, but left to pursue a career in movies that never panned out. Forced to return to TV, he’s typecast as bad guys and contemplates a stint shooting spaghetti westerns to restore his status as a leading man. Cliff, meanwhile – out of work as an actual stuntman owing to his sketchy past – serenely motors around the city, repairing Dalton’s TV aerial, popping home to feed scene-stealing pup Brandy and occasionally exchanging glances with one of Charles Manson’s eye-catching acolytes, Pussycat (Margaret Qualley).

The connection between Dalton and Manson is, initially at least, simply geographical. Dalton’s home on Cielo Drive is next to the one owned by Roman Polanski (Rafal Zawierucha), hot off the success of Rosemary’s Baby and engaged to up-and-coming actress Sharon Tate (Margot Robbie), whom the Manson Family brutally murdered in August 1969. Any direct restaging of that night’s events would no doubt have been in bad taste, but Tarantino more or less dodges any such accusations by doing for the Manson murders what he did for Nazi Germany in Inglourious Basterds; putting his own wildly entertaining, cartoonishly violent spin on history through the fictional characters he’s inserted into a real-life tragedy.

All the QT hallmarks are here – the jet-black humour, precision-engineered dialogue, jukebox soundtrack and, of course, bare feet. But there’s a sincere lament for the death of ‘old’ Hollywood, and the world that could have been, which marks this out as Tarantino’s most heartfelt and emotionally mature work since Jackie Brown.

Energised by the period setting, the film’s sense of time and place is simply astonishing. While cameos from the likes of Steve McQueen (Damian Lewis) and Bruce Lee (Mike Moh) can feel a little opportunistic, this is a nostalgic ode to the sun-drenched Hollywood of the late ’60s, where cars cruise carefree down the street to Simon & Garfunkel, and the neon signs of cinemas dominate Hollywood Boulevard. It’s a dazzling recreation of a long-gone Tinseltown.

If Manson represents the changes about to sweep America at large, Dalton personifies the changing face of film stars – out are the square-jawed tough guys, in are the easy-riding hippies. DiCaprio does some of his most understated work here, as Dalton wrestles with his own extinction. Pitt operates well within his comfort zone as Booth, who’s part Tyler Durden, part Rusty Ryan, but snatches the lion’s share of the film’s most gratifying moments. And while it’s true that Tate plays third fiddle to Dalton and Booth – Robbie’s often required to do little more than angelically drift through scenes – her inclusion comes with a point that we won’t spoil here, other than to say it’s an inspired tribute to a star tragically taken before her time.

Tarantino’s treatment of Tate is also a rare example of restraint for a filmmaker whose bread and butter is indulgent excess – something One Upon A Time… falls foul of during its somewhat bloated runtime. The baggy, backlot-set midsection – in which the film lingers on Dalton as he shoots his latest western series amid a crisis of competence – is Tarantino at his most unfocused. But even as it wobbles, Hollywood is never far from a moment of sheer magnificence.

In one standout sequence, Booth unwittingly walks into a teeth-clenchingly tense horror movie after giving Pussycat a lift back to the Manson Family lair at Spahn Ranch. In another, heart-wrenchingly sweet vignette, Robbie’s Tate spends an afternoon at the cinema watching the real Sharon Tate in The Wrecking Crew, the 1968 film she starred in with Dean Martin. And after two-and-a-half hours plus change, Tarantino pulls these disparate strands together for a deliriously entertaining final act that’s unexpected, audacious and just a little bit reckless. We wouldn’t have it any other way.

Once Upon a Time In Hollywood

Tarantino’s ode to Hollywood is his best since Jackie Brown; an evocative and disarmingly heartfelt LA story, capped by a finale you won’t forget.’