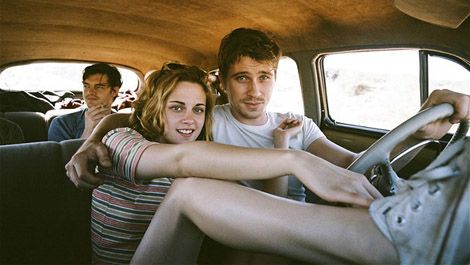 Over 30 years in the making, the film of On The Road has seen off countless casts, directors and writers.

And it’s not hard to see why: Jack Kerouac’s iconic Beat generation text is a plot-less ramble across post-war America that defies adaptation, with a narrative almost as free-form as the jazz tunes that filter from the dive bars its author-hero (and Kerouac alter-ego) Sal Paradise frequents.

That he and screenwriter José Rivera (who adapted The Motorcycle Diaries for Salles) have managed to do it with such elegance is even more impressive.

Loyal to the spirit of Kerouac’s book, there are times when this intoxicating brew burns across the screen with feverish passion, almost with the same fury that Paradise hammers away at his typewriter.

A story of friendship and freedom, it begins in 1947 when aspiring writer Sal (Sam Riley) meets the irrepressible Dean Moriarty (Garrett Hedlund).

The model for Beat icon Neal Cassady, Dean is the sun who draws many into his orbit – wife Marylou (Kristen Stewart), the Allen Ginsberg-like poet Carlo Marx (Tom Sturridge) and, later, Camille (Kirsten Dunst), who becomes his second wife (and must put up with his continual philandering with Marylou).

As Dean and Sal criss-cross the continent, taking in Denver, San Francisco, Mexico and more, the texture and period detail are beautiful.

Like any road trip, there are stretches that can feel repetitive (there are only so many times you can watch them take Benzedrine) but there are also landmarks to watch out for – from show-stopping cameos (Amy Adams, Elisabeth Moss, Terrence Howard, Steve Buscemi) to stand-out scenes.

Anchoring it all, Riley invests real feeling as he narrates Kerouac’s words, Stewart and Dunst commit like hell, and Hedlund tears up the screen with a free-wheeling performance that seems to embody Salles’ approach.

Even if the film has a patchwork quality, Rivera’s script mines some much-needed humour from events – from Stewart giving new meaning to the phrase ‘two-hander’ to the priceless scene where Dean drives Sal’s mother back to New York.

With its meandering narrative, it won’t appeal to all. But this is a heartfelt work worth surrendering to.