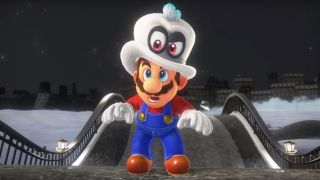 My first thought after Nintendo Spotlight was a simple one: that was odd. Not just because of the evil wedding planners or sinister spectral headwear, but because it was difficult to compute precisely how excited I was after watching it. The presentation was great - bright, enthusiastic, funny - and there was loads to get hyped about: Super Mario Odyssey looks incredible, and there were some essential nods to crucial titles scheduled for 2018. But on the other hand, it was over too quickly and our collective dreams of a Switch Animal Crossing remain locked in Tom Nook’s deepest vault. It didn’t feel like Nintendo squandered a chance to win E3 - more like they didn’t even feel the need to try. But the more I think about, the happier I am about what that means.

The opening video was a smart statement of intent. Playful competition is Nintendo’s immediate focus, and that makes perfect sense. The more people crowd around a Switch and discover that yes, it really can do all that stuff Nintendo showed in the trailers, the more machines the company is going to sell. To that end, it picked exactly the right games for the showcase: FIFA 18 and Rocket League are both intuitive, elemental titles, capable of crossing boundaries and encouraging new players (although not quite in the same way as Wii Sports). Splatoon 2 and ARMS are, by contrast, Nintendo games for people who don’t want to be teabagged by screeching strangers - fast, charming, feel-good experiences that happen to have a combative edge (Splatoon, incidentally, is the only online shooter I’ve played where one of the players was called ‘dad’ - how adorable). For now, it’s enough common ground to keep new players and the Nintendo hardcore happy. But what’s really interesting is what followed.

Xenoblade Chronicles 2, Kirby and Pokken look like solid titles which will review well, but they’re not the sort of games that win E3. Instead, the most tantalising bits of Nintendo Spotlight came from hints at things to come. Like most of Twitter, I felt a surge of excitement before the ‘oh, it’s Pokken’, comedown, but it was counterbalanced by the reveal of a core RPG Pokemon game for Switch. There’s something candid and cheerful about the way Nintendo share this information, and speculating about exactly what form it’ll take is half the fun. At the absolute least, we can predict it’ll be the most advanced Pokemon game ever made, adding to a series that keeps improving. And while the Switch is essentially a handheld, there’s still an unnatural thrill that comes with the thought of playing Pokemon on a big screen.

The reveal of Metroid Prime 4 performs a similar function. It was always there, hanging in the distance, a game people wanted Retro Studios to make before realising it was actually working on a Donkey Kong title. But just knowing it exists feels like Nintendo squeezing your shoulder, leaning in, and saying, ‘we listened’. Because of this, Reggie Fils-Aime’s assertion that Nintendo Spotlight was mainly about 2017 feels wide of the mark. In fact, after watching, only Super Mario Odyssey has made our master list of best E3 2017 games. But the nicest thing is it doesn’t matter. The Switch is already worth owning. In the past, the idea of a ‘proper’ 3D Mario game was directly related to success - how could a Nintendo console survive without one? - but Breath of the Wild means it’s now just an added bonus.

Perhaps Nintendo was never going meet our expectations. Before every E3, fans across the world list every conceivable reboot then grumble when they don’t appear. We’re terrible masochists; disappointment is our kink (I’m allowed to generalise because I do exactly the same). But it’s no longer just a case of Nintendo not delivering. Its focus has shifted. Nintendo Direct means we get information throughout the year, and although we didn’t see Animal Crossing on Switch today, if doesn’t mean that it won’t arrive next week, next month, or next year. (Hopefully not the last one.)

30 cute gameplay tricks from Super Mario Odyssey that has us cheering, "Let's a-go!"

In previous years, Nintendo has failed to exploit lacklustre conferences by Sony and Microsoft. That doesn’t feel like the case today. While I didn’t come away punching the air at the thought of a new Yoshi game, I’m no longer worried about Nintendo. Great new games will come. We’ll get Animal Crossing eventually. Nintendo Spotlight was the presentation of a company that knows it has a killer machine and enough good games to shift it, who don’t need to force a reaction with grandstanding announcements. In fact, having Miyamoto appear on stage during the Ubisoft conference, in what was perhaps the most uplifting moment of E3 2017, still feels like a vicarious win for Nintendo: “By all means, have our emblematic developer - we’ll be schilling Amiibo in the Treehouse.” It’s a refreshing feeling after years of frayed nerves, praying for the game that would reverse the troubled fortunes of the Wii U. E3 2017 proves that Nintendo, unlike Princess Peach, no longer needs saving.