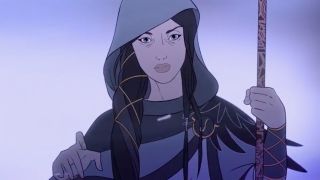 With Switch, Nintendo isn't making the same mistakes it made with the Wii U, and exhibits 1 through 14 are the "Nindies" announced today as part of a special Nintendo Direct can. That's right, 14 high-quality games on their way to Switch. Oh, and they're all coming this year.

So, what's on its way to Nintendo's handheld / home hybrid? Let's break it down by how long we'll have to wait:

Garage is a top-down shooter with gameplay and settings inspired by '90s B-movies and coated with a visual filter that makes it look like the whole thing is being viewed on a VHS tape. There are zombies, mutants, and plenty of other nasties to put down, in what looks like a more horror-infused take on Hotline Miami. Nintendo didn't show off any of the game's more violent portions during the Direct, but you can watch a reveal trailer below:

Light Fall is kind of like the gameplay of Super Meat Boy plus the aesthetic of Limbo. You'll run, jump, and dash (even creating your own platforms to extend or enhance your abilities) through unforgiving gauntlets on a quest to save Numbra, land of eternal night.

If you ever owned a PSP, you'll recognize this next favorite: Lumines Remastered. This puzzle game combines music and rhythm mechanics with the block placement gameplay of something like Tetris, creating an addicting, hypnotic loop of sight and sound.

Pode (pronounced POO-duh) is quite the unique co-op game, inspired by Norwegian art and culture. As one of two spritely characters, you'll work together with your partner to solve puzzles and unlock secrets held deep within a mysterious mountain. Looks cute!

Reigns: Kings & Queens is an intuitive game currently available on mobile devices (okay, technically it's two separate games, which makes the Switch version a two-fer) that lets you build a kingdom via Tinder-style swiping interface. Do you want to let in a foreign merchant offering to sell you his exotic wares? Swipe right! It's all terribly clever, funny, and well-written, and is a natural fit for Switch.

You might have heard of West of Loathing thanks to its PC release in 2017, but the slapstick comedy starring stick figure cowboys and cowgirls is coming to Switch as a console exclusive. Part RPG, part narrative adventure, all meant to delight and bring a smile to your face.

Bad North is described as a "roguelite, real-time strategy" game starring small armies of vikings. It's a bit more intense than the cartoonish visuals might make you think, and if you lose even one soldier, they're gone forever.

If you prefer your viking tales of adventure to have a bit more story (and by "a bit" I mean "a lot"), then keep your eyes peeled for The Banner Saga 3. Of course, what use would it be to have the third and final chapter of this acclaimed series but not the first two? Thankfully, The Banner Saga and The Banner Saga 2 are also coming to Switch, though their release dates are to be determined.

Bomb Chicken is a 2D puzzle / platformer. It stars a chicken that lays bombs. Please direct any questions to this charming trailer:

Like the idea of fighting games but can't get past the learning curve of memorizing combos? Fantasy Strike simplifies inputs so it's easy to land impressive attacks and standardizes character health bars so you can easily see how many hits you can take before K.O. Not as complex as Street Fighter but not as simple as Divekick, Fantasy Strike could be a great entry point into the fighting game scene.

Just Shapes and Beats is a bullet hell game centered on dodging a flurry of basic geometric shapes, where each "attack" is synced to the beat of a thumping chiptune soundtrack. So shapes... and beats. Get it? Based on the demos we've played in the past, it should be an exciting, party-friendly experience.

The Messenger is an homage to games like Ninja Gaiden (the NES original, not the Xbox version) and the Shinobi series. Tight controls, intimidating bosses, and challenging level design alone would make this worth watching, but it also has the added wrinkle of shifting the world between 8-bit and 16-bit. Check it out:

Mark of the Ninja Remastered brings the 2012 stealth masterpiece from developer Klei (Don't Starve, Invisible Inc.) to a new platform with crisp, high-resolution animation. No word on any other features unique to this remastered version.

Pool Panic, a collaboration between Adult Swim Games and Rekim (Hohokum), inserts you into a world where everyone is just a billiard ball with legs. Your goal: sink the 8 ball, of course. Watch the trailer to see why that might be easier said than done, and join me in immediately wishlisting this unique game:

And that's everything from the March 20 Nindies Nintendo Direct! Got enough games for ya?