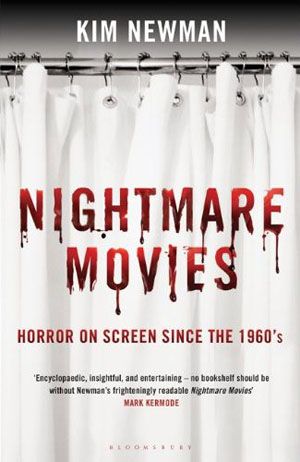 If a documentary concerns horror movies, you can bet your house on Kim Newman turning up as a talking head. It’s tempting to put that down to his unconventional sense of style (does anyone else suspect he slobs about in jogging pants and Nikes at home?), but this reissue is a reminder that the Empir e scribe’s high profile isn’t just down to his telegenic penchant for dressing like Isambard Kingdom Brunel.

Last published in 1988, this thematically-arranged overview of “horror on-screen since the 1960s” stands alongside David Pirie’s A Heritage Of Horror in the small category of essential books on horror cinema. This new edition updates the original with footnotes, some substantial (an update on David Cronenberg’s output runs to four pages ), then adds another 300 pages, detailing trends like the post-Hannibal Lecter serial killer boom, the pomo scares of Scream and the unstoppable rise of the romantic vampire.

What’s impressive is how ahead of the curve Newman was. The likes of Let’s Scare Jessica To Death are still pretty obscure, but he was recommending them two decades ago, in the pre-DVD age. Although he gets a little too het-up about the worthlessness of slashers (crack open a beer and chill out while Jason some punches heads off, Kim!), his taste is generally impeccable – anything that gets a lengthy write-up is worth Amazon wishlist-ing. And he has the rare ability to combine accessibility with astute observations and considerable wit – The Shining , for example, is summarised as “a Grand Guignol remake of I Love Lucy ”.

If Newman’s writing has one flaw, it’s a compulsion for lists that might be better relegated to footnotes - when he launches into detailing “17 other Bigfoot films” or the like, it becomes rather like trying to read the genealogies in the Bible. And for a softback book with no colour stills, that RRP seems a little steep. But for the price you’re actually liable to pay online, it’s worth every penny.