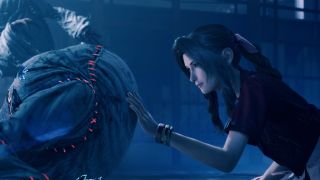 The latest batch of Final Fantasy 7 Remake screenshots is all about Tifa, Summons, and the goings-on of Midgar. You can check out the full gallery on the PlayStation Blog, and we've picked out some of the best shots below, complete with additional details from Square Enix.

Tifa and her abilities are the star of today's image pack. First up, our best look yet at her three-stage special attack: Whirling Uppercut to Omnistrike to Rise and Fall. Here's how those moves look in action:

We also saw some of Tifa's standalone special abilities, which are tied to her ATB bar in the Remake's action-based combat system. Have a gander at her True Strike and finishing Dive Kick:

Speaking of combat: today's images also showcase two more Materia. Below, you'll find Aerith using her Healing Materia to cast Cure, as well as Cloud using the Deadly Dodge Materia, which can be equipped on any character to give them a strong evasive follow-up.

Oh, and here's a bonus shot of Cloud hitting a crab with a nail bat, because it made me laugh out loud.

Finally, we've got a selection of character and environment shots which are littered with useful information. These shots of Chandley, a new NPC in Sector 7, detail the new Battle Report side quests which can be completed to unlock new and upgraded Materia. Battle Reports sit alongside the new Mercenary Quests, more traditional odd jobs issued by various NPCs which can be completed for miscellaneous rewards.

To round things out, Square Enix shared some high-res close-ups of eloquent beast companion Red XIII, antagonist Professor Hojo, and Summons like the Chocobo Chick and Carbuncle, two critters whose combined foreheads could comfortably support a 747 Boeing.

In case you missed it: PS4 exclusivity on the Final Fantasy 7 Remake will now last until April 2021 due to the game's delay.