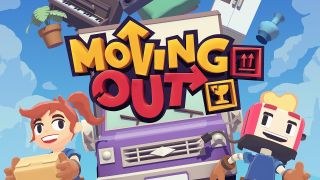 Moving Out launches on April 28, Team17 has announced. The chaotic co-op game inspired by Overcooked asks players not to cook in a busy (and highly flammable) restaurant but rather to move unwieldy furniture out of a house and onto a moving truck.

Lugging oblong couches through narrow door frames is typically one of the worst ways to spend a weekend, but Moving Out’s co-developers at SMG Studio and DEVM Games think they’ve cracked the code and made moving fun. It will be playable entirely in local co-op for up to four players. Players will be able to choose from several characters including cats, dogs, humans, and toaster-headed friends. You can see the game in action in its new release date trailer.

The game will also offer a range of accessibility options at launch, which the publisher has detailed in a new blog post. Moving Out’s Assist Mode includes options to increase time limits, reduce the difficulty, and make objects disappear when they make it to the truck, saving you and your co-op partners from needing to Tetris the bulk of it once you get out the door. Players will also have the opportunity to skip levels upon failing them and make two-player items lighter and easier to carry around.

The developers have really stressed inclusivity in Moving Out and to that end they’ve also ensured the game offers dyslexic friendly UI options, a scalable UI, and subtitles. Players will have several controller maps to choose from on consoles, while those playing on Steam will be able to fully remap their control schemes however they see fit.

If you need more co-op chaos in your life, it looks like Overcooked 2 is teasing something new.