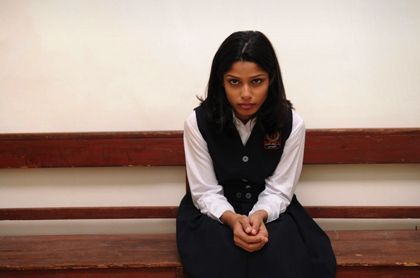 The visual stylistics of Julian Schnabel’s first three films (Basquiat, Before Night Falls and The Diving Bell And The Butterfly) are largely absent in his fifth, as is their single-minded focus on one complex, real-life individual (something they have in common with his 2008 concert pic Lou Reed’s Berlin).

If Miral is intended as a departure, alas, it’s a rather stodgy and literal one, for all its commendable attempts to put a human face on the Israeli-Palestinian conflict.

Four faces, to be precise. Rula Jebreal’s script (based on her novel) follows four Palestinian women coping with privation, persecution and prejudice in the newly created Israel.

Beginning in 1948, Miral initially concentrates on Hind Husseini (Hiam Abbass) and her mission to set up an orphanage for parentless Arab children.

Jumping forward to the 1960s, it then introduces us to Nadia (Yasmine Al Massri), a troubled young woman who, having been jailed for thumping a Jew on a bus, is befriended by a fellow prisoner (Ruba Blal) serving three life sentences for terrorism.

The upshot of this is the movie’s half over by the time we meet its title character (Freida Pinto), a wilful pupil of Husseini’s who is radicalised herself when she is sent to teach at a refugee camp in the 1980s.

It also turns the film into a drawn-out history lesson, replete with references to key developments (the six Day War, for example, or the Oslo accords of 1993) and supporting players (Vanessa Redgrave, Willem Dafoe) whose only function is to convey contextual exposition.

Told wholly in English, the result feels a bit like the intifada for dummies.

And though some sequences impress – notably Blal’s tense planting of a bomb in a cinema showing Polanski’s Repulsion – the disparate plot strands stubbornly fail to coalesce.

Most will admire Schnabel’s serious intent, but it has to be allied to storytelling nous. As it is, this is one of those films to admire more than enjoy.