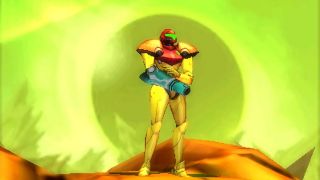 Metroid: Samus Returns is coming out on Friday and the reviews pouring in across the internet are a soothing balm for the troubled Metroid fans' soul. Both the game's surprise announcement during Nintendo's E3 live show - not even the main event, but right after - and its external developer, MercurySteam, led many of us to temper our expectations. But after you get done reading this review round-up, you may be ready to hope again.

"Metroid 2 exists in this strange state - its storyline and events represent this key moment in the series’ chronology, but the game itself, on the black and white Game Boy, is difficult to go back to and enjoy. Samus Returns presents a much more palatable way to experience this story, and for diehard fans who know every inch of the monochrome version of SR388, this stereoscopic 3D version is vastly different enough in gameplay and geography to be considered an entirely new entry in the Metroid series."

"One of the big new additions to the franchise is a melee counter system that allows Samus to stun enemies with well-timed button counters that expose their weak spots and leave them vulnerable to a quick finish. This counter makes the moment-to-moment action more engaging than past 2D Metroids, and it keeps you on your toes because you never know when some creature is going leap from the shadows. Whenever I missed a counter, I knew it was my fault, but I loved finding the perfect flow in combat and hitting two or three counters back-to-back then wiping out a screen’s worth of enemies in seconds."

"Compared to Metroid 2, Samus Returns is absolutely huge, and its areas are correspondingly complex. In true Metroid tradition, you will constantly come upon locked areas, some of which require items that you don't acquire until much later in the game. One side effect of this is that you are encouraged to return to areas you've previously explored: something that was absent amid the relentless forward momentum of the original game. You won't find much - mostly optional add-ons like missile tanks - but it does have the effect of making SR388 feel like a more coherent whole, as opposed to a series of discrete sections. Plus it's good for completionists."

"It’s also worth mentioning how nice it is to have the map open at all times. Thanks to the 3DS’s dual screens, you don’t need to access a separate menu to keep track of where you are. You can also use the touch screen on the map to place markers if you need to give yourself a visual reminder to check an area again later when you have more abilities. It’s nuts that this feels like a novelty, since Nintendo has had so many dual-screen systems since the DS launched in 2004, but this is the first time one of them has had a 2D Metroid game."

"This is a very different kind of Metroid, then, which is all fine and, if you've any familiarity with the original Metroid 2 at all, is to be expected. As Samus Returns progresses it does come more into focus - exploration becomes less of a chore, the combat more purposeful when pitted against more elaborate foes - but never to the point of elevating it above many of Metroid's recent imitators. It's a problem for the series, of course, that in its absence an entire cottage industry has emerged that seeks to scratch that same exploratory itch. Axiom Verge, Ori and The Blind Forest - and, of course, AM2R, Milton Guasti's unofficial Metroid 2 remake that was served with a DMCA takedown shortly after its release last year."

"This game doesn’t just look better, it looks phenomenal. It’s not necessarily in the way Samus or her enemies look or move: you more or less know what you’re getting there so while they look detailed enough, it is what it is. The jaw-dropping element is the background environments, which are so detailed and give such depth you often forget you’re playing on a 2D plane. Creatures occasionally wander around in the distance. Industrial areas span back as far as the eye can see, with demolished robots and pneumatic presses showing there was once intelligent life on this planet. In one section, a faraway stone pillar crumbles as you walk past, emphasising that the environment is unstable."

"Upgrades aside, the all-important Metroid battles are the other star of the show, and you will encounter over 40 of them during your mission at varying stages of the species' evolution. You initially battle with Alpha Metroids, the first step beyond the familiar jellyfish form. Without advanced weapons and defenses at the start, you will struggle a little while they dive bomb you from overhead, but their always-exposed weak points make them easy targets. The next few evolutions are notably more powerful, but ultimately pale in comparison to Omega Metroids, towering quadrupedal beasts that can quickly climb walls and spew damaging fireballs. More than simply for the sake of personal gratification, hunting for hidden items in your environment feels necessary to survive some of your first encounters with the more advanced Metroid evolutions."

While you're waiting for Samus to Return, check out more Nintendo goodness with our lists of the best 3DS games and the best Nintendo Switch games.