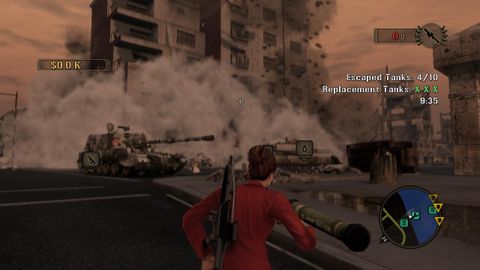 Whoa. This is a next-gen game? The first impressions of Mercenaries 2: World in Flames aren’t going to be dislocating anybody’s jaws in amazement. Do not adjust your sets and all that, but this looks like a buttered-up PS2 game on first booting up. But then a friendly airstrike kicks in, and that subtitle, World in Flames, comes alive. At least fire and destruction and choppers fire-balling into big trees are properly this-gen.

It’s hard to see exactly why Mercs 2 has been held back for well over a year. The core gameplay has hardly been altered since we played this last July; the missions, general game structure and mechanics were all in place, and they were pretty polished too. Instead, the online options have suffered the cull, with play ‘limited’ to online co-op and nothing else. It was too tricky to have the original idea of fully free-roaming multiplayer implemented – as it caused all sorts of problems with the rest of the game. When you consider the size of Mercs 2’s theatre of operations, full co-op is a hefty achievement. At first it was going to give each player total freedom, but in a map some 64 square kilometres big, that would have been unworkable, so now players are tethered together.

There is considerable slack to the leash though, and many of the missions are tailor-made for a twin assault. Early on there’s an opportunity to impress the president of Universal Petroleum, the ruthless mega corporation hellbent on taking over Venezuela, by rescuing one of her executives from Venezuelan Liberation Army kidnappers. It involves choppering in radio beacons to three enemy bases and clearing out any opposition. At such an early stage in the game it’s pretty tough – we had to restart a couple of times. With another player things were considerably easier. We stormed the gate of one base, blowing watchtowers and gun emplacements to bits, while he blew a hole in the wall with C4 explosives and sneaked in around the back to destroy the barracks.

In retrospect, it was quite odd in that mission to find a UP base and a VLA fortress right next to one other. Perhaps rival military factions get preferential tax breaks if they set up shop in the same neck of the woods. Must get a bit hectic when rival squaddies go out for lunch. One thing’s a constant in Mercs 2 – each side frequently takes shots at the other. A feeling of a country being torn apart from the inside permeates the game. The occasional building is raised to the ground and civilians run around panicked. When you’re presented with a seemingly living city, the times when the rules get broken become all the more glaring. Chaos in a war-torn environment is fine, but random behaviour grates. Civilians darting in front of your vehicle are a right pain in the arse, and this even happens when you take it slowly, giving you a $5,000 fine. Sometimes, Forces friendly to you will also inexplicably get under the tracks of the tank you happen to be driving, blowing themselves (and you) up, while incurring the wrath of that faction to boot. Still, for the most part, that thin veneer of realism just about holds.

Once in the swing of the game, the idea is to get as much work as possible from each of the warring factions without pissing their enemies off so much that they go after you. This is a delicate balancing act, the trick to which is alternating – providing, of course, that you want a more rounded game. You could always just side with one faction for the majority of the game – but then you’d be missing out on blowing the shit out of everybody. And that’s half of the appeal knocked out in one fell swoop.

Missions vary from picking up VIPs to chasing down dissidents and getting them out of the way so that guerrilla warfare or oil piping is not impeded. In general they follow a similar pattern. You’re given your mission, you search around frantically for something to get to where you need to be in, you skitter through one of the many townships trying not to crush civilians (doing so incurs a whopping $5K fine – the cost of paying off news crews to keep it quiet) and then when you get to your destination, you generally blow the living Jesus out of the area with a combination of handily placed tanks, discarded rocket launchers and called-in airstrikes.

There’s no place for stealth here, just like the first game. Mercs 2 is brash, loud and ultimately, a great antidote to Metal Gear Solid’s finesse. Subtlety is nowhere to be found here. The head scratching extends no further than trying to decide whether to order a full-on tank strike over an armoured car supply drop. Aside from the main missions, there are numerous pick-ups to be found and smaller, well-paid odd jobs scattered about the place. You’ll come across huge crates of cash and tanks of fuel lying around. Make sure and grab the cash.

Once you’ve completed a certain part of the game, you get to recruit a chopper pilot whom you can call in to airlift such goodies away. Be careful who you pinch it from, though. We made the mistake of chucking a smoke marker down by a fuel tank in a UP compound, thinking that as we were in their good books, they wouldn’t mind if we helped ourselves to some of their supplies. Wrong. A quick call to check that we weren’t supposed to be doing that, and all of a sudden they let me have it. So we jumped in a car and bolted, as you do.

But the longer you spend immersed in Mercs 2’s world, the more you become aware of its shortcomings. Dialogue repeats annoyingly fast. Vehicle handling is a little twitchy. The main problems are the missions themselves. They’re just not involving enough to really grip you. This is a massive game world with loads to do, yet you’ll never find yourself spending hours playing it. You’ll dip in, get bored and then go back later. The Co-op mode is fun and certainly helps draw you back into the game, but World in Flames won’t set your world alight.