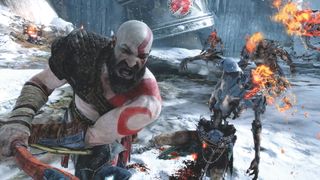 Once just another way to spruce up your Powerpoint presentations with gaudy clipart, GIFs are now an inescapable internet commodity, integrated into social media, text messaging, and even the online workplace as a key form of communication. Everyone, from conglomerate corporations to your technophobic grandparents, are using them, but their ubiquity perhaps belies the artistry that can be crafted from the bitmap image format.

Nine years ago, art critic Paddy Johnson famously called 2010 the “Year of the GIF”, ruffling a few feathers in the process, but hindsight is a funny thing. Since then, GIF themed art exhibitions have taken place all over the world, with individual pieces sold for almost $6000, and the cinemagraph - a technique which mixes still images with moving animations - has become a respected art form in its own right.

In the context of this evolving rebirth, we find SunhiLegend (a.k.a. Sunjeev Kumar), a video game player who has been creating and releasing endless numbers of high quality gaming GIFs to viral acclaim on Twitter. You might not be familiar with him, but chances are you’ve seen some of his work online, from his smooth supercuts of PS4 heroes in action to his slapstick choreography on Monster Hunter World.

“It was back during the release of Gran Turismo 5” explains Kumar, when asked about how he first got into his wholly unique line of work. “I used to see GIFs for other games, but I didn't really see much for Gran Turismo back then, so I checked a few tutorials on how to turn a video file into a GIF and went from there. It wasn't until about a year later when I started making GIFs for other games that I decided to get a capture card. Before I was just taking videos off YouTube but it was getting frustrating as I didn't have control over the actions or camera, but with my own captures I can get the shots I like instead.”

It’s only been an upward trajectory for Kumar since then, as his GIFs have been viewed by millions, praised and rewarded by online personalities and game industry veterans alike, including God of War’s Creative Director Cory Barlog. The SunhiLegend Twitter account has accumulated over 25,000 followers, and Kumar himself is often contacted by developers showing their appreciation, to the point where Guerilla Games even invited him to their offices following his series of Horizon Zero Dawn GIFs.

“It's just a hobby and something I used to post on forums without many people seeing them. I only started using Twitter shortly after the release of Horizon Zero Dawn, Jan-Bart [Van Beek, Art Director at Guerrilla Games] saw the GIFs and asked about them, that's when I started using my Twitter account and the gifs became more popular and this stuff blew up for me.”

“It's really awesome and appreciated so much, it's not something I expected, I love video games and I just try to showcase them the best I can. It was pretty mind blowing to be invited over and spend a month at Guerrilla because I made GIFs from the game, everything just blew up from there onwards, and whenever I have received messages from devs or gifts from PlayStation or Santa Monica it's just really awesome and more motivation to keep making the GIFs.”

But is Sunhi’s process really just as simple as playing a game, capturing a few precious moments, and turning them into an animated image primed for internet virality? In describing his work style, Kumar reveals that the art of GIF creation is as just as laborious a creative endeavour as you’d expect from any other, though he admits he’ll never capture footage from a game unless he personally enjoys playing the experience itself.

“I sometimes happen upon some great shots just through my normal playthrough”, he tells me. “I just always try to be aware of what the camera is doing, basically trying not to make sudden movements too much and keep everything nicely in frame. That way when I edit I've got more options when it comes to cropping, zooming, and panning the image."

“Other times I do try to setup a perfect shot or action that I like, that could take a while - hours even - finding the perfect lighting conditions, choosing the right gear for the character, repeating the same move over and over until I'm happy with the final shot. I also have a notepad where I always list any ideas I come up with either while playing or just while browsing online, I might see something or think of something that I think look cool so I note it down, then try to turn that idea into a GIF or save it for later.”

If you’re familiar with Kumar’s output, you’ll know that PlayStation exclusives like God of War, Bloodborne, and Spider-Man PS4 are his common go-tos for GIF capture, and you can understand why. Visually stunning titans with expert controls and a fluid, cinematic sense of motion that are ripe for plucking, Kumar says that third person action games in general are his favourite when it comes to finding the best GIFs.

“They're all very well animated, that's one major aspect in why the GIFs look good. It makes a huge difference... that, and also the lighting! Final Fantasy 15, for instance, doesn't have the best combat system out there, but it's animated so well and looks so good that I can still have a lot of fun with it and the reason I still go back to it all the time.”

The GIF format isn’t going away anytime soon, and there’s no doubt a new generation of players and artists rising to take inspiration from Kumar and try creating their own snapshot images for online display. I ask him if he has any advice for the budding GIF artists now starting out like he was back in 2013.

“As long as you don't move the camera around too much, make sure it's easy to see what's going on, make sure to keep the character the same and not all over the place, disable the HUD for a clean image, and try to pull off or do something cool looking in the game, you should be good to go.”

“I try to play as cinematic as I can. Always disable the HUD and keep the camera  steady, it's just how I usually play really. But then I do look out for moments which I think would make a great gif. I might halt my playthrough to reload a save and go over a certain section a few times to get a nice capture before continuing.”

With new games of 2019 like Anthem, Devil May Cry 5, and Sekiro: Shadows Die Twice on the horizon, Kumar surely has plenty of material to work with for the next year and beyond. His creativity with the graphic interchange format (in case you were wondering what GIF actually stood for) is not only a constant source of online eye candy, but a stark reminder of games’ visual power as pieces of moving art, revealing new angles for appreciating the finer details of interactive entertainment within just a few, irresistible seconds.

It’s no wonder developers are so happy to see SunhiLegend exhibiting their games to such a massive online audience, but Kumar will tell you that all he’s doing is expressing his love and passion for a medium where every frame deserves to be savoured.