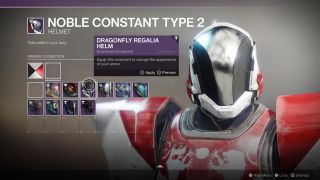 Bungie is going all-in on expanded armor and other RPG elements in the upcoming Destiny 2 Shadowkeep expansion, and as Destiny director Luke Smith announced today, the studio's making big changes to the in-game, real money-driven Eververse Store to support this shift. Let's start with the biggest change: as of September 17, all Eververse armor pieces will become Universal Ornaments which can be applied to any post-Shadowkeep Legendary armor.

"It stinks to go to the Eververse store and see an item that looks cool and then seeing that the item has bad perks on it," Smith said in a blog post. "In fact, when we’re setting up the armor, we’d twist ourselves up in knots to make sure the Eververse armor sets didn’t have good perks … We’re done with that. As of this September, all Eververse armor is being converted into Universal Ornaments. These Universal Ornaments can be applied to all of the Legendary armor sets we’re releasing this Fall. They override the look of your equipped gear while preserving the perks, mods, and stats of the original item."

For all intents and purposes, this is Destiny's first true stab at transmog - the ability to apply the appearance of one piece of gear to another piece of gear that has the stats you want. Players have been asking for a transmog equivalent for years, so this is a pretty big deal. Granted, this system will be limited to the Eververse armor you've unlocked through seasonal, event, and Bright engrams, and only Legendary armor acquired in or after Shadowkeep will be eligible, but this will still unlock a ton of cosmetic options.

This should also work well with the Armor 2.0 system Bungie previously teased, which will reportedly let players hot-swap individual perks between armor pieces. It also pretty much confirms that the system changes coming in Shadowkeep won't be retroactive, meaning we'll likely dump all of our current armor - not that I'm complaining. In with the new, I say.

To make this pseudo-transmog system and general customization more accessible, Bungie is also changing the way Bright Dust is spent and acquired. Silver is Destiny 2's premium currency, but Bright Dust can be earned just by playing the game, earning Bright Engrams, and completing Eververse bounties. However, also beginning September 17, dismantling Eververse items will reward Legendary Shards and Glimmer instead of Bright Dust.

"Historically, the best way to earn Bright Dust in Destiny 2 has been to buy a bunch of Bright Engrams, shard everything from the engrams, build a giant bankroll of Bright Dust and then spend it when the Warlock Dire Ahamkara helmet shows up [in] the Bright Dust row in the last week of the season," Smith explained. "We’re going to change this."

As Smith said, dismantling Eververse items has always been the best way to get Bright Dust. That option is going away, so to offset this change, Bright Dust rewards are being added to Vanguard, Crucible, and Gambit bounties. Smith said that "after you complete all your bounties for the week, there will be an additional avenue to keep grinding out Bright Dust." This will hopefully provide a more consistent source of Bright Dust than merely breaking down Bright Engram rewards.

What's more, once Shadowkeep drops, purchasing Eververse items and shaders from your Collections tab will no longer cost Bright Dust. Instead, they'll cost Glimmer and Legendary Shards. In other words, if you like the look of an Eververse Ghost or Sparrow but you don't like your roll, you won't need to spend more Bright Dust to get the version you want.

Given the changes coming to the Bright Dust economy, Bungie advised players to dismantle all unwanted Eververse items - shaders, sparrows, Ghost shells, transmat and Ghost effects, armor - before September 17 while they still award Bright Dust. You'll be able to reacquire all of them for Legendary Shards and Glimmer once Shadowkeep is out.

"Everything must go - dismantle the extra stuff you have in your inventory, build up a huge amount of Bright Dust, and spend it on sweet stuff as it rolls through the Eververse store - because on September 17, everything changes," Smith said.

These seem like great changes which will make customizing Guardians much easier and more exciting. This will not only give countless abandoned Eververse armor sets new life while letting players make their best-rolled armor look its best, it will also help with Destiny 2's relative lack of new activity-based armor sets. The ability to repurchase Eververse items without taking a hit to the Bright Dust bank is the cherry on top. Good things all around. Shadowkeep is looking better by the week.

In other news, Bungie is looking at a Destiny 2 Lord of Wolves nerf, but it looks like it's too late to save this week's Iron Banner.