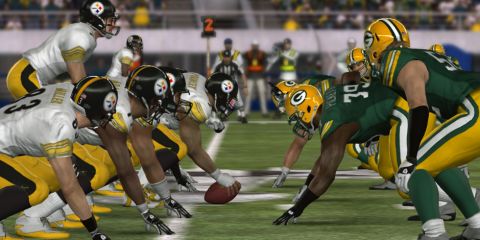 The annual August release of Madden is a day of celebration for sporting types across the country. Classes are skipped, sick days are called in, and a whole lot of people geek out in delight. This season, most of us who participate in Maddenoliday will be happy; Madden 11 delivers another solid gridiron experience, stuffed with new features, old favorites, and some serious work under the hood. All that heavy lifting leaves the final presentation feeling a little unpolished, though, and a couple yards short of greatness.

Madden feels pretty different on the field this year, due mostly to the long-overdue removal of the Turbo button. Because of this %26ndash; and some seriously improved blocking - the running game is a delight. Ballcarriers are greatly rewarded for being patient and letting their blockers do their work. Getting rid of Turbo was a gutsy move, but we love it. It forces us to play smarter and removes an undeniably video-gamey mechanic.

Passing isn%26rsquo;t really revamped, although some subtle improvements have been made in how receivers adjust to the ball in the back of the end zone and on the sidelines. More often than not, though, the defensive side of the ball feels gimped. Our linemen consistently got overpowered by their counterparts, while defensive backs seemed incapable of making many open field tackles. More than ever, playing defense is an exercise of trying not to screw things up too badly instead of a way to dominate an opponent.

When defenders do make contact, the improved locomotion system produces spectacularly realistic tackles and physical reactions to collisions. Players still get caught in animations on occasion (particularly quarterbacks in the pocket), but we haven%26rsquo;t tired of the array of brutal hits that pepper each game.

Online play is always huge with Madden, and the newest twist %26ndash; 3 vs 3 Team Play %26ndash; is a hit. You and two buddies divvy up the roster three ways to take charge of groups of players (QBs, RBs, and receivers, for example) and coordinate your attack on both sides of the ball. We can see this being pretty darned awesome when you%26rsquo;re teamed up with friends; unfortunately in our limited pre-release play we suited up with a couple of strangers and hilariously uncoordinated failure ensued. It%26rsquo;s a great concept, though, and we%26rsquo;re pumped to give it a more thorough spin once everyone has access.

Another big change this year has been the creation of GameFlow. It%26rsquo;s a lazy Madden player%26rsquo;s dream (or, if you%26rsquo;re all about using the gameplanning feature, a great way to quickly execute your vision). When turned on, it will pick your plays for you and pipe in an assistant coach%26rsquo;s explanation. If you haven%26rsquo;t pre-set a game plan, it%26rsquo;s not particularly effective at anything other than shortening the game a few minutes. Purists need not fear, though, as standard play-calling options still remain.

Our biggest problem with Madden 11 is the less-than-stellar presentation, which is worse than last year. Five years into the life of these consoles, Madden should be buttery smooth from start to finish. Instead, we%26rsquo;re given twitchy transitions between plays, visual pop-in during cutscenes, players gliding through referees, and more-than-occasional half-second pauses just before the snap.

Not all of our presentation gripes are about bugs, either. We love watching our heroes get filthy during rain-soaked games, but that%26rsquo;ll never happen in Madden 11. We played multiple games in different grass stadiums in torrential rainstorms, and not once did the players get a speck of mud on their uniforms. The new audio commentary doesn%26rsquo;t sound quite right, either, as if newcomer Gus Johnson and holdover Cris Collinsworth were calling the same game from different locations. All of these little things add up to a game that just doesn%26rsquo;t look and feel how one of the biggest titles of the year should.

Ultimately, Madden 11 is a good effort, and one that%26rsquo;ll keep most sports fans happy this season. Having said that, it%26rsquo;s not a standout season, unlike some past hallmark Maddens that hold up well today. The guts are there for greatness, but there%26rsquo;s still some work to be done until it reaches that high level.