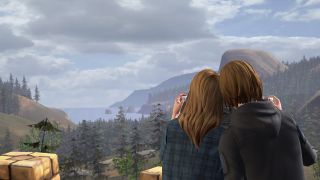 There’s something fittingly familiar and jarring about going back to the world of Life is Strange for its upcoming prequel, Before the Storm. The iconography is immediately familiar - the leaves, mountains, and slightly worn, small-town Oregon aesthetic make for an instantly comfortable return to the series - but being set three years earlier than the original game, with a Max-free Chloe as the lead character, and any hint of magical powers eschewed in favour of pure storytelling, it’s a game that maintains a familiar look while feeling decidedly unknown.

It’s fitting, of course, because that clash between the familiar and the unsettling is the core of Life is Strange, such is the troubled, disconnected nature of its adolescent protagonists, struggling to find a place in the picturesque environs that had previously been home. It’s also fitting that we have a new lead in Chloe, just as we have a new developer in Deck Nine Games. With new voices leading proceedings, and different conceits driving the plot and character motivations - in this case the recent death of Chloe’s dad - this is a game with its roots very much planted in the values and concerns of what has gone before (or rather, what is yet to happen), but which feels freer to be its own tale than is usually the case for prequels.

It’s the focus on the minutiae that does it. By doubling down on the micro view of small, defining, ostensibly mundane events - and the kind of innocuous, interpersonal nuance that can quietly hit with the sustained force of a steamroller - Life is Strange can pack a vast amount of new drama, trepidation and revelation into the smallest of cracks in the scenery. Even when you know exactly what’s going to happen.

Example: when I meet Chloe in my demo - hands-off, but played live, her decisions made by the democratic mechanism of a shouting audience - she’s trying to bust into a local gig in a crappy local venue, for which she doesn’t have a ticket. As bland and standard-issue a teen dilemma as can be, then, but one elevated to the level of a low-key epic by the intricacy of the detail within.

The venue, you’ll know from a thousand parochial, teenage concerts and club nights. It’s that consummately rotten shed-with-ambition, structural integrity held together with sheer, bloody-minded willpower, and resplendent in its inability to give a fuck about presentation or comfort. Of course there’s shitty, pseudo-witty graffiti everywhere, recycling the pub toilet comedy and puke-headed philosophy you’ve read in a dozen other, equally unique venues for equally unique people. Of course there are those skeezy guys at the bar, covering all angles between them to spot any girl they haven’t alienated yet, apparently just to make sure that they absolutely haven’t got a chance with anyone in the building. Of course there’s an arrogant, high-functioning pot-dealer slumped in the corner, seemingly inert until disturbed, but then suddenly aflame with the righteous egotism known only by those who sit around all day, stoned, and doing nothing.

And of course, there’s the guy selling band t-shirts at an over-inflated price, out of the back of the car. And because there’s nothing cooler and more prestigious than band merchandise when you’re in your mid-teens (especially if it’s from a semi-obscure, semi-local bunch whose logo people will ask you about), that guy will be our first target. One problem though. As valuable as the kudos attached to said shirts surely is, in mid-teen financial terms, value is a complicated matter.

With no wiggle-room on price, it’s time to get ‘creative’. Wandering off to explore the grotty environs of the club further, Chloe finds an opportunity to release the car’s brake in order to engineer a swift distraction. It’s interesting to note that in most RPGs, this choice would be deemed the ‘Renegade’ option, and possibly come with some degree of karmic baggage. But in Before the Storm, there’s no moral pondering at all, either explicitly in-game or (apparently) in the minds of our collective decision-makers.

That’s because, rather than the choice defining Chloe’s character in simplistic terms, here, things work the other way around. The underhand, ‘me first’ course of action springs naturally from her current personality. It’s a great reflection of who she is right now, broken, angry, and perpetually lashing out at a world that has recently taken a great deal from her. In her mind, this isn’t theft, but a righting of the balance. It’s never stated, but it doesn’t need to be. The world owes her, and she’s simply settling the accounts. It’s a great piece of ambient character-building through gameplay.

Brake unlocked and car rolling away, it’s (nearly) job done. The t-shirt guy chases his vehicle until it stops, and then sets about investigating what happened. Chloe now has access to an unguarded trunk, and sets about grabbing what she wants. She grabs a shirt, naturally, but a corner-eye glance later, things get a lot more interesting.

The t-shirt money has been left next to the merchandise. And there’s a lot of it. Around $200, in fact. Suddenly we do have a chance to make a bigger choice about Chloe’s morality. Suddenly, it becomes clear that this was really the point of the puzzle. It wasn’t actually about getting a t-shirt. It was about setting up an opportunity to find out how far we could balance her deceitful behaviour against the weight of the pain she’s in. We think about this for a moment, and then we take the money and go. Again, no judgement. This isn’t about playing Good Chloe or Bad Chloe. It’s about gaining a greater understanding of our interpretation of her situation by exploring how far we relate to and sympathise with it.

That said, the first of no-doubt many spiraling repercussions is about to kick in.

Going back to chat to the dealer - a younger version of Frank, from the original game, incidentally - we can now clear Chloe’s significant debt to him and score a dash more weed as a bonus. There’s no indication that this is necessary, but it has changed Chloe’s relationship with Frank for later down the line, and informed a bit of her present situation to boot. That scenario settled (for now), we set about finding a way into the gig, but not before exploring the environment a little more. Along the way we find a newspaper telling the story of heavy lay-offs at the local dock. We find a spot on the wall we can graffiti ourselves - illicit scribbling is Chloe’s replacement for Max’s photography opportunities. We find a surly guard-dog we can pet. Nothing earth-shattering then, but all stuff that colours and strengthens our attachment to the world with nice economy. And then, busted wooden staircase up to an off-limits balcony area discovered, Chloe is on her way up to her own private show.

But it’s not over yet. Those two skeezy guys? They’re back, and their fragile drunk egos are primed and ready for some payback for Chloe’s earlier put-down. There’s an argument, that leads to a shouting match, which then gets physical - we try to defuse it and walk away at first but, well, fragile male egos and booze. Just as things are threatening to get really nasty, help walks in. It’s Rachel, arriving just in time for her and Chloe’s historic first meeting. The two of them deal with the situation, and the foundation of a friendship is laid. A small moment in the great scheme of things but, like all of Before the Storm’s small moments, also as large and weighty as they come.

But my demo doesn’t end here. We then cut ahead to later in the game, for an extended look at the burgeoning relationship that spawns from these events. Things start out innocently charming, the pair bonding over made-up conversations between passers-by, viewed in the park below through a telescope. A date between the strangers turns into a shock revelation of prostitution. Then it ‘transpires’ that both distant, unnamed parties are prostitutes, unsure of who should pay who. It’s funny, good-naturedly snarky stuff, and a smartly endearing fast-track into the pair’s inner-world. But then another fast-forward later, and things have changed again.

Now it’s Rachel’s turn to be closed-down and standoffish. Something - we don’t see what - has changed her mood drastically, and Chloe can neither make sense of it nor improve it. What follows is a tense, slightly heartbreaking look at the possible dissolution of a relationship before it’s really begun. And with both players behaving and responding not like conveniently programmable conduits of video game cause-and-effect, but rather flawed, unpredictable, irrational people, there’s no easy route to manipulation to be had. Chloe stumbles and staggers over her own frustration as much as Rachel’s mood, and wins failure from several clear instances of doing the right thing.

But that’s how things work in Life is Strange: Before the Storm. Where other games will sketch out and flag up the Big Important Events in terms of clear systems and obvious, external tells of how to deal with them, here you’ve got to deal with the messier internal world as well. In fact beyond that, the messy internal world is what it’s really all about. A point hammered home as hard as can be - fittingly, by way of an unspoken decision - when at the end of the demo Chloe’s biggest, most dangerous, most life-or-death, heroic ‘set-piece’ so far comes down to the simple choice of whether or not to tell someone how you really feel. In the end she chickens out and takes the easy option, but one way or another there will almost definitely be repercussions.