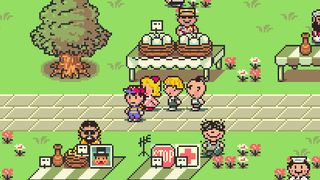 Mother 3, the third entry in Ness's classic RPG franchise, has never been localized for a western audience. There have been a few attempts at full fan translations but nothing official from Nintendo or any of the other developers involved in the franchise.

While levels of hope have gone up and down over the past thirteen years since Mother 3 (known as Earthbound in the United States) launched, nothing has ever worked. Now there's another chance as Japanese magazine Famitsu and Hobonichi, a Japanese company that designs and produces various daily life products founded by Earthbound designer Shigesato Itoi, have put out a survey asking fans for their thoughts on where the Mother series should go next. It's in celebration of the franchises 30th anniversary.

"In the weekly issue of Famitsu September 12, 2019 (released on August 29, 2019), we will carry out a questionnaire on the RPG "MOTHER" series, which will reach its 30th anniversary," reads a rough translation from the survey, which is only available in Japanese. "Please tell us about your feelings for the "MOTHER" series, such as lines of your memories and favorite characters. The deadline for the response is 23:59, Thursday, August 1, 2019 . [Only the part that can be answered is fine], so please cooperate."

The survey asks 21 questions about fan favorite moments, lines, games, and desires for the Earthbound series, including a question about what players desire for the series in the future. It's only one question at the very end of the survey but if you're a lifelong fan of the series sharing your thoughts before the deadline on August 1 couldn't hurt.

Mother 3 may never come to the West, but you can enjoy one of the 15 best JRPGs instead.