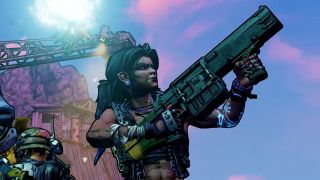 Borderlands 3 is due for a proper gameplay reveal tomorrow, May 1, but Gearbox accidentally shared a clip of the game via Twitch this past Monday, April 29. The clip was quickly removed, but not before it was archived on Reddit.

You can watch the full 26-second clip here thanks to Reddit user JaumDX. It's very short, and was mainly meant to explain the newly announced ECHOcast Twitch extension - which will let Twitch viewers earn loot before the game's even out - but it does contain a few nuggets of new information.

The standout for me is the addition of Item Scores to weapons and gear. Borderlands games have always been good about indicating whether new guns are better than the stuff you have equipped, but they've never had literal score values before. After seeing this clip, I wouldn't be surprised if Borderlands 3 uses an Item Score system similar to The Division 2's Gear Score or Destiny 2's Power Level, with your character's level serving as an average of your Item Score. However, Borderlands 3's Item Score could also just be an indicator of an item's quality.

Speaking of new stats: the guns seen in this clip all have a Handling stat, which is also new to Borderlands. Again, I wouldn't be surprised if it functions like Destiny 2's Handling, which determines how quickly weapons can be readied and stowed. The clip also shows sniper rifles which can swap between two elemental damage types, and while we've seen multi-element guns before, the ability to manually toggle elements is new.

Similarly, the equipped weapon in the clip shows a full-auto firing mode in the bottom-right corner of the HUD. This indicator is next to a d-pad button prompt, so seeing as how we can swap elemental types, I'm willing to bet some guns will also be able to change firing modes, like from full-auto to semi-auto.

Not a bad info haul for 26 seconds, and I'm sure we'll learn plenty more tomorrow. In the meantime, check out our Borderlands 3 trailer breakdown for more hidden details.