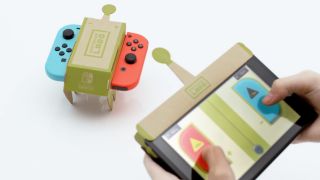 Godammit, Nintendo has done it again. I was one of the Labo sceptics when the cardboard construction kits were first announced, now - after an afternoon playing with them for myself - I'm already wondering how I can incorporate them into elaborate drinking games. At the Labo Studio I got to build the RC car and the fishing rod, and then Nintendo let us loose in a cardboard playroom with everything from the Variety Kit on show, and... sharp intake of breath... the Robot Kit.

The RC car was an easy build, just a little bit of folding, the Joy‑Cons slotted in, and I had two race cars that could be controlled with the Switch's main screen. Without wanting to sound like a stationery shop owner with a fetish, the cardboard was just the right amount of sturdy, and the tabs locked into their slots with a satisfying, papery click. Every step is illustrated step by step on the Switch, and you can change the camera angle and zoom in to make sure you're not sticking your tab in the wrong whole. Nobody likes it when that happens.

But beyond just the building and the racing, there's another level to the RC cars too. You can use the Joy-Con with the built-in infrared camera to turn your innocent little vehicle into a travelling spy cam, with either a night-vision or heat map feed sent back to the Switch screen. Here's looking forward to the first Labo sex tape!

Next up we were tasked with constructing the fishing rod, which involved grommets and string and elastic bands, and a lot more concentration. While the building process was a lot more intense, holding a working fishing rod, with a reel and a telescopic bit, felt like a real achievement, and gave me access to an addictive fishing mini-game where you have to wait for a nibble, flick your rod to hook in and then reel like the wind. I was going for a shark but had to settle for a 65cm sea bream.

The rest of the Variety Kit I got to play with included a motorbike racing game where you tilt your body to steer, and twist the throttle handle for more speed. The rumble from the Joy-Con was a nice touch, and it's easy to picture Nintendo Labo Mario Kart kits coming out in the near future. The little house kit was cute too, with a generically adorable creature living inside on the Switch screen, and different buttons and elements that can be attached to unlock different mini-games. One might turn on a tap and flood the little creature's home, another addition will turn the house into a cart ride or a hamster wheel. My favorite of the rest of the kit though? The piano. Not only is it a technical masterpiece, you can change the type of sounds you play with, and the minute I found the cat meow notes I was hooked.

There's another side to the piano too, one that hints at the intimidating future possibilities of the Labo. It also has a mode where you can place paper or cardboard shapes inside to design fish (the infrared camera at work again) that will then appear in the fishing game. 300 years ago this would have been considered actual witchcraft, even now it feels like some sort of wizardry.

And that Robot Kit? If it looks crazy in the videos, it feels balls-out mental when you're strapped into the thing. First up, yes, it only uses two Joy-Cons (one in the headset and one in the backpack), everything else is just pulleys and magic. You march on the spot to walk, tilt your head to choose direction and punch your arms to, well, punch. Squat and you'll turn into a tank, place your arms straight out at your sides and you'll fly, put the visor on and you'll got into first person mode. There wasn't a huge amount of depth to the game that I got to play - though it was nice to see a calorie count letting me know I was doing excellent work burning off some Labo branded Gummi bears - but I still wanted to steal a kit off the shelf and customise my own killer robot suit. No jury in the world would convict.

Finally some Nintendo staff in bright pink blazers showed us how the Toy-Con Garage would work. Basically, this is the part that is going to set imaginations and YouTube alight, because it's the part where you can build and Labotamise (I'm going to trademark that) your own creations. At its heart is a simple programming set up, you choose the input (say, shaking the left Joycon) and the output (a musical note) and connect the two. We saw it at work creating a guitar - where you strummed lines on the Switch screen to play music - but also saw footage of it working in a vending machine, a bank, and a version of Pong. This video gives you the idea.

Nintendo is about to breed an entirely new generation of inventors and programmers, and they're going to make some awesome things. And I for one welcome our new cardboard overlords.