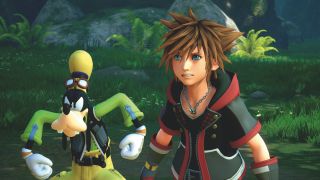 Update: Kingdom Hearts 3's Critical Mode is every bit as challenging as players had hoped (and feared), even though it does things a bit differently from previous games. As Square Enix explained in a new post, the mode halves your maximum HP and MP and reduces the availability of mid-battle Situation Commands and magic. It also unlocks three new abilities which are available when you start the mode:

These are the only parameters Square Enix confirmed, but players have also reported leveling more slowly and dealing less damage. We could just be placeboing ourselves, but the Critical Modes in several previous Kingdom Hearts games did slow EXP gain and reduce damage dealt, so it's possible those values have also been tweaked behind the scenes in Kingdom Hearts 3. Hardcore players will undoubtedly work out all the math soon enough.

Critical Mode has appeared in several Kingdom Hearts games, and while it's always one of the hardest difficulty modes available, the exact rules for it have changed over the years. The basis is this: you take way more damage (usually double) and deal way less damage (as little as half). So no matter how Kingdom Hearts 3's Critical Mode plays out, it's going to be hard.

In Kingdom Hearts 2 Final Mix, for example, Critical Mode decreased EXP and MP earnings but increased some AP gains. And unlike most other games, it slightly increased the damage you deal while also doubling the damage you receive. Similarly, it gave you some abilities a bit earlier. So while it did make the game much harder overall, it also relaxed certain elements to keep the pace from plummeting.

Compare that to Kingdom Hearts Re:coded, which just straight-up doubled the damage you take and halved the damage you deal. Then there's Kingdom Hearts 3D: Dream Drop Distance, which made enemies flinch less often and increased the rate bosses use their strongest moves on top of fiddling with the damage. It'll be interesting to see how Kingdom Hearts 3 has "changed things up" for Critical Mode. In any case, if you loved the world and characters but you've been looking for a greater challenge, I'm sure it'll be hard.