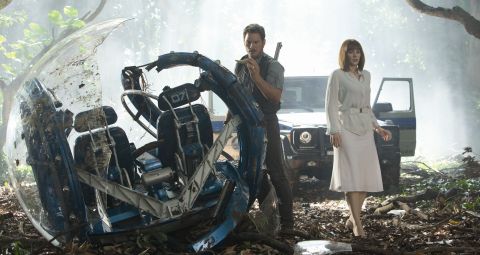 Reminding us why we loved the original Jurassic Park, Trevorrow puts a fabulously fresh spin on familiar material.

The series gets its rex drive back…

It’s a fair point: some 22 years since Steven Spielberg brilliantly breathed life into these prehistoric creatures in Jurassic Park, seeing dinosaurs roam the Earth – or rather on a private island near Costa Rica – is no longer quite the wonder it once was.

Even if the T. rex and its pals have been largely absent from cinemas since 2001’s Joe Johnston-directed Jurassic Park III, their mythological counterparts have not. From Pacific Rim to Godzilla, modern audiences have been well-served with CG-driven beasts causing wanton destruction on the big screen. So, like the lady says, why on earth do we need another Jurassic Park?

Incoming director Colin Trevorrow approaches the question with zeal. Inspired by a trio of ideas bestowed to him by Spielberg, Jurassic World is a fiendishly crafted blockbuster: old-fashioned thrills, heroism and romance, locked inside a smart, self-aware shell. Quite an achievement for a director whose only previous experience was the likeable-but-limited 2012 time-travel indie Safety Not Guaranteed.

Unlike Johnston’s sequel and Spielberg’s own earlier 1997 follow-up The Lost World, both of which were guilty of recycling ideas and characters from the original, Jurassic World finally realises the vision of Richard Attenborough's John Hammond, the billionaire who first dreamt of a theme park full of prehistoric dinosaurs. Heading back to Isla Nubar, we learn that this ultimate attraction has been open to the public for a decade – backed now by Masrani Global, the corporation that took over Hammond’s InGen after his death.

With this so-called Indominus rex set to be unveiled, overseeing final safety checks is Howard’s aforementioned operations manager… on the very same weekend her two nephews, the hormonal teen Zach (Nick Robinson) and his younger, dinosaur-crazy brother Gray (Ty Simpkins), are set for a long-overdue visit.

It doesn’t take a palaeontologist to predict the Indominus rex will escape, nor that these squabbling siblings are set to be prime dino-feed. With this in mind, more than any other characters, Trevorrow and his co-writer Derek Connolly – who veered significantly from an earlier script by the co-credited Rick Jaffa and Amanda Silver – work hard to establish their relationship. Between Zach mooning over girls and Gray tearing up about his parents’ divorcing, you’ll care about these two nippers in peril.

If Guardians Of The Galaxy’s Peter Quill was Pratt’s Han Solo, then Grady is his Indiana Jones. Should the rumours of Pratt’s appointment as a rebooted Dr. Jones come to pass, then surely the barrel-roll he does under a closing gate of the raptor enclosure serves as the ideal audition.

More problematic is Bryce Dallas Howard’s contribution. This is her first role since 2011's The Help; with her character forced to cross a far bigger emotional canyon than Pratt, it makes for a tricky comeback. Given her arc – cold-hearted careerist who must find her soul en route to survival – it’s not hard to see why Joss Whedon tweeted that early footage of her made him think of “70s era sexism”. It doesn’t help that, rather ridiculously, she spends the entire film in high heels (even sprinting in them, in one slow-mo sequence).

As he did with Safety Not Guaranteed, Trevorrow toys with archetypes – and, to be fair, the banter between Pratt and Howard is more enjoyable than offensive. Think Harrison Ford and Kate Capshaw in Spielberg’s own Indiana Jones And The Temple Of Doom. Impressively, when romance flares, it’s swift, unexpected and makes the heart leap. And while a safety-video bit falls flat, the humour is largely well-timed – notably an attempted kiss, amid the height of panic, that goes disastrously wrong.

Like Spielberg, Trevorrow pays great attention to what makes a summer blockbuster tick. Set-pieces are brisk but well-executed – whether it’s Zach and Gray trapped, like figures in a snow globe, by the Indominus rex, or the later scenes of park-wide carnage when the dinosaur droppings really hit the fan.

Trevorrow may never quite match some of the classic scares of Jurassic Park – the blood is kept to a few splatters on the wall in this 12A – but it’s an electrifying watch, capped by a superb smackdown of a finale every bit as beastly as Godzilla or Pacific Rim.

Aiding the adrenaline is the excellent 3D conversion. Understanding depth and perspective like few other blockbuster directors, Trevorrow reserves the leap-out-from-the-screen moments until strictly necessary, but you’ll really feel like you bought a ticket to Jurassic World. The blend of animatronics and CGI is also as seamless as you might expect: the director clearly recognises the need for us to feel the textures of the earlier films, which is just as important as hearing that wonderful John Williams score again.

Not everything clicks: a fight in the jungle between Special Forces soldiers and the Indominus rex feels like Trevorrow and co. spent the night watching Predator. And a storyline involving Vincent D’Onofrio’s scheming employee planning to use Owen’s trained raptors as military-grade weapons is rather underdeveloped.

But these are minor gripes in a film that is unquestionably the best entry in the franchise since the 1993 original. Not impressed by dinosaurs anymore? Just you wait.

Reminding us why we loved the original Jurassic Park, Trevorrow puts a fabulously fresh spin on familiar material.