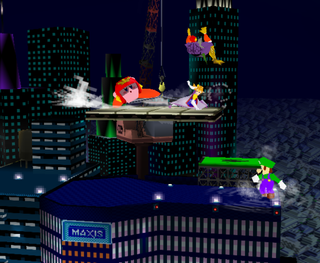 I jumped back into Super Smash Bros. Melee last week and after playing Super Smash Bros. Ultimate for several months straight and Melee felt old. That's not a bad thing, it's just tough to jump between games all willy nilly. It's even tougher when Melee, one of the best fighting games of all time, gets modded to look like it was made for the Nintendo 64.

Independent filmmaker, video producer, and modder Connor Rentz recently dropped Super Smash Bros. Melee 64. It's a mod for Melee "that looks and sounds a little more like a Nintendo 64 game" according to the Rentz's website.

The mod uses lower quality models for both characters and stages, as well as implementing more 64-esque music, in order to capture that unique Nintendo 64 feel. It even performs at a smoother level than other similar mods running on a dolphin emulator

"Super Smash Bros. Melee 64 not only uses lower quality character models, but also has fewer polygons on many stages as well as simpler (and often lower resolution) textures," reads an entry on the sites Q&A section "In many cases, this mod will run more smoothly than other versions of Super Smash Bros. Melee. For further performance improvements, make sure that Dolphin is running in the native GameCube resolution or smaller. Another way to improve performance (and to make the game appear as intended) is to play in the native4:3 aspect ratio."

It's a fun little twist on the classic platform fighter whose community is known to mod Melee far more than any other entry in the series. The difference here is that most mods make other games, like Super Smash Bros. Brawl, more like Melee. This mod will be a treat for fans of the original game.

Looking for other mods for some of your favorite games? Streamline your sword training with this Sekiro: Shadows Die Twice boss rush mod.