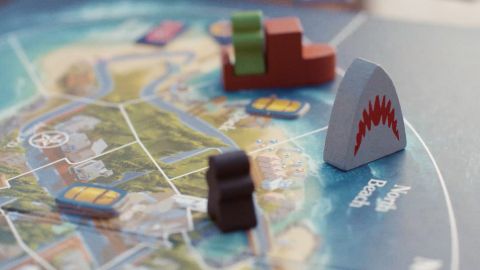 Two gripping but unique rounds combine for one of the best co-op board game experiences around.

The Jaws board game has proven that I'm a monster. It'll do the same to you. But that's a good thing - honest. Although it's bristling with the sort of tension you'd expect considering the source material, what you might not anticipate is how much fun you'll have chowing down on victims as a dirty great shark. What's more, the teamwork your opponents will need to get the better of you puts it in the running as one of the best cooperative board games of 2019. It's all giddy desperation and last-ditch efforts.

The Jaws board game is really two in one. The better you do in the first, the easier your life will be during the second. Designed by Ravensburger for two to four players and based on the classic 1975 movie, its core gameplay is strong enough to be appealing even if you've never seen the film. Still, that's not to say fans will find Jaws lacking; the arresting sense of dread it weaves from start to finish helps it live up to THAT theme tune. It's straightforward and relatively easy to get your head around, too.

As per the movie, things kick off on Amity Island with swimmers flocking to the beaches. Unfortunately for them, a peckish great white is lurking in the shallows and would very much like a bite to eat. One player takes control of the lively sea monster, and their objective is to consume as many swimmers as possible. Everyone else is in charge of the film's heroes - police chief Brody, oceanographer Hooper, and shark-hunter Quint (you don't need a player for each of them, though; one person can control all the crew members at once, making this a good board game for 2 players). Their task is to find and stop the predator before it makes a meal of nine people.

They do this by attaching barrels that force it to the surface. However, that requires a blend of tactics, skill, and luck. You see, the shark's movements are kept secret - its opponents don't know where it is or where it'll strike next. As such, they'll need to make clever use of detection systems to seek out their quarry.

That's where random event cards come into play. They complicate things for both sides by adding new swimmers, re-opening beaches you've closed, or giving a much-needed bonus to the shark or heroes. What follows is a tense but engaging game of cat and mouse. And it's great; broadly speaking, this opening round is absolutely gripping. Its finely-honed anxiety brings a team together, and there's something moreish about eating your way through Amity as the shark. In fact, few adaptations are as evocative of their source material.

My only criticism would be that the shark can feel overpowered when you're learning how to play. Until you get into the swing of things and/or have a sense of the game's tactics, winning as the crew in round one can seem like a tall order.

Still, those event cards - and everything else in the game, for that matter - play host to amazing artwork. Much like the Disney Villainous board game (another entry from Ravensburger), they're rendered in a beautiful, painterly style. That attention to detail extends to its deliberately washed-out 1970s color palette, wooden 'meeple' playing pieces, and the abundance of references you'll find throughout. A great deal of care has gone into this adaptation, and it feels distinctly premium as a result.

Not that you'll be able to dwell on this for long. You then move to Jaws' second round aboard the good ship Orca, and it's a battle to the death. The shark's objective this time is to destroy the boat and/or consume the good guys - whichever comes first. Meanwhile, our heroes must kill the shark with whatever weapons they can put their hands on. But here's the twist; whoever won the first round will start with an advantage. Ate loads of swimmers as the shark? You'll begin with more special abilities now. Caught the shark quickly as Brody and co? You'll have more weapons to use against it. It's a clever way to add jeopardy to each round, and those consequences set it apart from the multitude of other board games for adults.

It's a little more straightforward than round one, too. That's to the game's benefit; you only have to worry about smacking the shark as hard as you can. In addition, it's pretty well balanced. Both sides have a good chance of victory, even if one or the other struggled earlier on.

As before, the shark's movements are a mystery. Whoever controls it will be given three location cards to choose from, and these dictate how much power and evasiveness it'll get in that area. At the other end of the scale, our heroes must decide where they think the shark will emerge. Do you divide and conquer? Or do you congregate in one spot to boost your chance of a kill? You'll have to choose wisely, because the shark may just eat the boat out from under you and dump everyone into the sea. Awkward.

Basically, each round is great - but for slightly different reasons. This two-in-one approach makes sure Jaws stays fresh throughout, which isn't a small achievement for a game that takes two or more hours to finish. As a result, you'll have a blast playing it.

Yes, some won't enjoy the pressure behind it all. But those who stick with Jaws? They're left with a memorable, genuinely nerve-wracking experience that is one of the best board games we've gotten our hands on recently.

Two gripping but unique rounds combine for one of the best co-op board game experiences around.