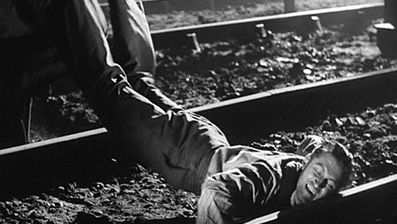 Ealing director Robert Hamer ( Kind Hearts And Coronets ) had a passion for french cinema, and with Rains he made a fair stab at transposing the poetic realism of Marcel Carné/ Jacques Prévert ( Les Enfants Du Paradis ) into a British context.

Googie Withers is on top form as the discontented wife of an older man whose sexy, dangerous ex-lover (John Mccallum) comes back into her life after escaping from jail.

At the end–as so often in Hamer’s work–family life closes in again like a trap.