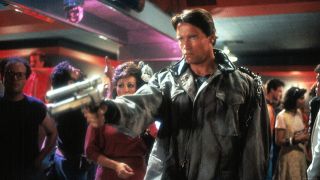 As a film-loving teenager, my weekly highlight wasn’t Friday night at the cinema, but Sunday night in front of the telly. Why? Because of Alex Cox’s Moviedrome.

The cult movie strand was where I first saw Brazil and The Terminator, but it also introduced me to Jean-Luc Godard, Robert Bresson and Frank Zappa’s insane 200 Motels. Cox – and, later, Mark Cousins – was an enthusiastic guide, without whose stewardship I doubt I’d be quite so obsessed with cinema now.

Along with Howard Schuman’s BBC Two doc strand Moving Pictures, it was
a great time to dive deeper into film culture via TV. And for mainstream tastes, there was always the reassuring Barry Norman and his Film review show.

Fast forward to 2019, and there’s not much to watch, especially now Film – latterly presented by Claudia Winkleman – has been cancelled for good. That’s a shame: a culture that can’t discuss cinema is a poorer place.

Some might argue there’s no need for TV to do this job. Streaming giants offer hundreds of movies on tap. Boutique labels like the Criterion Collection give classic films a fresh lick of remastered paint. The internet is swarming with opinions... some of them worth hearing.

There’s endless choice – but that’s the problem. How do you decide what to watch? Finding anything old or avant-garde on Netflix is difficult, because its algorithms are trained to cater to your existing tastes. The exception is Mubi, whose strategy is one of carefully curated juxtaposition. Yet like Criterion, it’s staunchly aimed at people who already love movies and are prepared to pay for the privilege.

That’s where Moviedrome was especially useful. You’d stumble across something, free of charge, you never imagined existed: an obscure western or a flickering film noir. And Cox’s passionate criticism helped to place these movies within larger contexts.

We need the likes of Moviedrome to keep that spirit of discovery alive. There’s an obvious candidate to present a reboot in Mark Kermode, whose recent Secrets Of Cinema has been a compelling reminder of how good small-screen film criticism can be. So let Kermode loose on Sunday nights. Heck, let him show 200 Motels. Or is it just me?