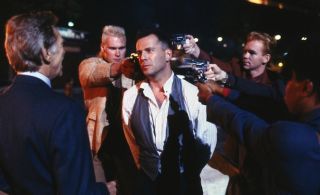 Hudson Hawk is often tarred with the same brush as other ’90s blockbuster misfires, such as Arnie’s Last Action Hero and Sylvester Stallone’s Judge Dredd. A costly flop – a ballpark budget figure is $70m – it was considered by cinemagoers and critics to be more turkey than hawk.

The consensus has stuck, though there’s a case to be made for Hawk as a sparkling, gonzo oddity in a world of mainstream dross: an example of an A-lister making a passion project after paying his dues. The script is credited to Daniel Waters and Steven E. de Souza, but Bruce Willis came up with the story. That his dream was to make something so wilfully bonkers, and that backers handed over the dough, shows how brightly his star shone back then.

Unlike today, where he occasionally acts like he cares, but mostly collects pay-cheques for pap. Absurd, chaotic, hilarious and surreal, Hawk’s madcap plot makes about as much sense as chocolate teapots.

The central conceit alone is bananas: Eddie ‘Hudson Hawk’ Hawkins is the world’s greatest singing cat burglar. As for the execution, imagine a Dan Brown-style actioner written by Salvador Dalí and directed by Tex Avery – that’s Hawk in a nutshell.

Plus, the villains are wonderfully nuts. Sandra Bernhard and Richard E. Grant are a match made in heaven as Darwin and Minerva Mayflower, billionaire baddies who crave world domination and make Donald Trump look a model of reason. Stealing every scene they’re in, Bernhard and Grant strut around like they own the film. Which they do.

Darwin gets the best lines – “I’ll torture you so slowly, you’ll think it’s a career” – but Minerva has a repertoire of bored sneers and annoyed gestures to go with her man-eating sexuality. Peak Minerva is her chilling- out on a boardroom desk, surrounded by lackeys, singing to Snap!’s (“I’ve got”) ‘The Power’: a terrific feminist image.

Thanks to a cadre of inventive insults and one-liners, bizarre beats and a cartoonish vibe, Hudson Hawk is unique among ’90s star vehicles. But mostly, it’s Bernhard and Grant who push the caper into comic masterpiece territory. Or is it just me?

– Should we just do away with movie trailers? argues Simon Kinnear

– Are all boxing movies basically the same? argues Paul Bradshaw