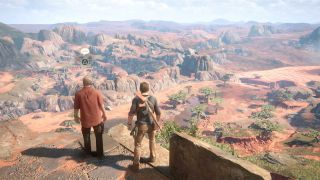 Has there ever been a less exhilarating message in gaming than “concept art 63 unlocked”? Call me a fuddy-duddy but after I’ve trekked halfway across a needlessly large world map to find a well-hidden shiny thing, a lo-res sketch of a random enemy isn’t really the sort of thing that will make me happily sit back and contemplate a quest well done.

This has to end. We have to take a stand. No more are concept art, character models and sound test tracks acceptable rewards in gaming. It’s time for developers to show a little invention and bring us more substantial goodies that better suit modern technology.

Here’s the clever bit: they don’t even have to change what they give us. They just need to give it to us in a different form. My plan is for some sort of website where you can register and receive your rewards as you collect unlockables in the game.

How rubbish is it when you unlock concept art that you can only view in an ‘Extras’ menu, where you have to zoom in and out and pan across the image on your screen? What if instead, when you log into your account on the website, the art is available to download as a hi-res image in a variety of sizes so you can use it as wallpaper on your desktop or mobile?

Sound tests? Most of these games have incredible soundtracks, but they’re going to waste because life’s too short to be staring at a static screen while listening to them. Let us log into our account and download them as MP3s so we can enjoy them on the go. “But that means they can’t buy the soundtrack, Chris.” Hey, we’ve already dropped £40 on your game, throw us a bone.

Not a fan of this website idea, developers? Sound like too much work, with the account setup and all? Then here’s my secret weapon: instead of concept art galleries and character model screens, give us a VR museum where we can wander around, see all the game’s characters in actual size and view the concept art displayed on massive walls.

The rewards don’t have to change. But how we’re given them does.

Chris Scullion is a Celtic supporter. As a Scottish football fan, he’s used to not spending fortunes on superstars. He wants the FIFA 17 Henrik Larsson legend player, but since Henrik’s 495,000 coins, he might have to settle for Danny Ings.
See comments