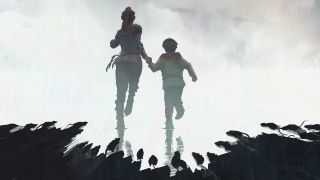 Amicia, the central character in A Plague Tale: Innocence, needs to get her younger brother Hugo to safety. He might already be a lost cause, though. Witnessing a plague of man-eating rats and being hunted by the torture-hungry Inquisition is slowly changing him, and not for the better. You’re to blame too. Killing any inquisitors in your way, you’re setting a dangerously amoral example for your little brother. Sitting in a room with (fake) rats crawling up the walls, I watched a macabre demo featuring the tiny tyke before chatting to Kevin Choteau, Lead Game Designer from Asobo Studio.

Amicia and Hugo are in trouble. Danger lurks everywhere. In 14th-Century France Inquisitors are out looking for them during the day, and during the night the children have devouring rats to contend with. Obvious comparisons to The Last of Us emerge during our chat. Nodding as I mentioned the game, Choteau says that “The Last of Us is an absolute reference for us. We are huge fans of Naughty Dog’s work and it’s certainly one of the things that made us react the most in the past years. All this discussion about The Last of Us with what it does with emotions has certainly been a huge influence on what we’re trying to do here”.

When it comes to specifics, he talks about Naughty Dog’s masterpiece being a “good reference [for] the emotion we want to have and, yeah, the really nightmarish version is this”. Seeing Joel and Ellie’s relationship develop over the seasons was touching, but the bond between siblings is different. As they’re already close, it remains to be seen whether Amicia tries to shelter Hugo from the horrors that wait for them, or gradually teach him that killing Inquisition soldiers to save their own skin is a necessity.

Potentially even stronger than the relationship between Clementine and Lee in The Walking Dead - they have already grown up together, after all. Hugo looks to Amicia for an example on what ‘normal’ looks like. All the time you’re playing, he’ll be watching. Thinking. Learning. Kill some Inquisitors by using the rats to your advantage, and he’ll notice. As the elder sister Choteau says that Amicia “needs to face the world and do everything she can to survive and Hugo’ll perceive that certainly in the bad way because she’ll be his only example”. A Plague Tale: Innocence isn’t one long escort mission though with some emotional development thrown in for the hell of it. Hugo is a sophisticated AI who can be commanded to perform actions: squeeze through gratings to get something on the other side, hold a lever while you run ahead, or wield a candle to keep the rats at bay.

Trauma doesn’t do justice to explain their backstory: the siblings are from a noble family, their father slaughtered by the bloodthirsty Inquisition who arrived to stop their mother’s ‘research’. God knows where their mother is, or what she was studying, though Choteau does mention it was linked to the rat plague. Whatever it was, her children are all alone, cast into a world they were too privileged to have ever encountered before. Choteau goes on to say (gleefully, I might add) that Hugo won’t remain innocent, as he “will be twisted [from] you know, seeing his big sister killing someone. Maybe the Inquisition guy being eaten by some rats – I think it would have an impact on your psychology!”.

Choteau’s right. These bloodthirsty rodents swarm in the dark and eat anything in their way. Having a light source like a lantern handy will scare them off, but you had better pray the flame doesn’t go out. Any character caught in the dark will be devoured in seconds. Amicia’s slingshot might not count as a weapon (she won’t directly kill any humans, I’m told), but when aimed at Inquisitors’ life-saving lanterns it becomes a deadly way to distract the rats blocking her way, or get rid of some soldiers on the lookout for her and Hugo. Every single rat has its own pathfinding AI, so you can split up swarms to solve puzzles or single out just one rat. Who knows, from Hugo’s viewpoint they might not be that horrifying - seeing his older sister manipulate them to get rid of an easily understandable human threat could even turn them into an amoral tool in his eyes, much like how unflustered Ellie is when walking through fungal spores.

Being faced with so much death forces people to make tough choices, and Amicia is no different. Unsurprisingly Choteau says that “Amicia will do hard stuff to survive”. Like Lee choosing who to save and who to abandon in The Walking Dead, it sounds like she’ll be faced with some morally ambiguous choices. Making them could be the least tricky part, with witnessing its effect on Hugo a far worse experience. Without a childhood for Hugo to be gently taught about morality and grow up at his own pace, he’ll be facing up to the unfiltered cruelty of the world at a formative point in his life. Although he won’t grow up beside you - the game is set over a short period of time rather than years - Hugo won’t act like a child forever.

Even younger than Ellie or Clementine, Hugo’s naive perspective (he is 5, remember) influences how the game progresses. “We play with the psychology of the characters, and what they think they’ve heard more than what they’ve really heard”, says Choteau. Although Amicia is 15 years old, she’ll have to try and keep up with Hugo at points as his perspective distorts reality. That doesn’t mean there will be bright technicolour sequences or angels instead of dead bodies (à la Little Sisters from Bioshock 2). What he ‘hears’ is much more unsettling. At the end of the demo their mother’s voice reverberates around the church, wailing for help. Hugo sprints in the direction it came from, certain she’s alive, ignoring Amicia’s yelled warnings.

What this means for the remainder of the game remains a mystery. The release date hasn’t yet been announced, nor has the platforms A Plague Tale: Innocence will be available on. Watch this space for more details!