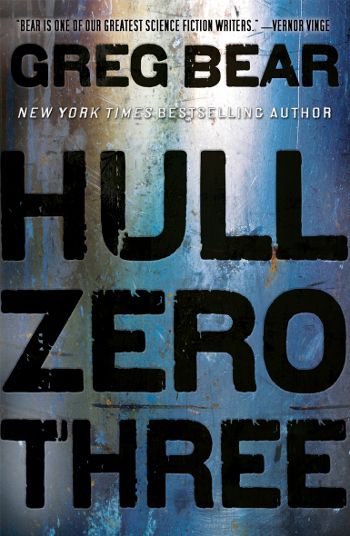 When less is more - hard SF reduced to its essentials

There’s a scene in, of all things, a documentary about folk musician Martin Carthy that springs to mind when reading Greg Bear’s new novel. First, we’re shown footage of Carthy performing “Scarborough Fair” in the ‘60s, a song he introduced to one Paul Simon. His picking style is rich and detailed; it’s a virtuoso performance. But then we see the latter-day Carthy’s reaction. His younger self, we’re left in no doubt, is a clever arse, a man over-elaborating because he can.

If you were being particularly unkind, you might say something similar about the work that made Greg Bear’s name. His “The Way” sequence novels, for example, are vast in scope, involving the creation of a pocket universe no less. Think Bear and you think big. Bigger than big. Vast. Humongous.

The shadow cast across Bear’s career by such novels as Eon has arguably been just as huge. And in many respects misleading, because the American has never just written big SF. Look down through his bibliography and you’ll see countless moments when he’s worked with just, ahem, the Bear necessities (sorry). For evidence, consider the unsettling, near-future hi-tech thrillers the author began to produce around the turn of the millennium.

Even though it’s set aboard a starship travelling light years away from Earth, you can make a similar observation about Hull Zero Three . The key here lies in the set-up. Rather than show us a teeming generation ship, or even portraying events from the perspective of a small crew of experts trusted to bring cryogenically preserved humans through the void, the novel is set on a craft where something has clearly gone very wrong.

Our guide to the ship is Teacher, who wakes from a hibernation state he calls Dreamtime to find himself naked and vulnerable. Teacher’s consciousness is as notable for its gaps as for what he knows. At moments, he’s akin to a Samuel Beckett character, trying to make sense of his world while operating with at best incomplete, possibly even downright misleading, information.

Despite this, he somehow has to negotiate a shipboard environment that’s somewhere between hostile and downright lethal - and grotesque and eerie. This isn’t a novel to pick up at 4.00am when you can’t sleep.

Embarking on a ship-traversing odyssey, Teacher eventually becomes part of an oddball gang of cohorts who, between them, might just be able to figure out what’s gone wrong. More importantly, they might even be able to correct the situation while heading off a threat to the ship’s continuing viability.

It’s a simple story told simply - perhaps even too simply, in that one of an often cryptic book’s seemingly more concrete plot developments may be just a little too convenient as (without giving too much away, Bear plays with the idea of benevolent beings influencing human development.) It’s also a book written in a pared-down style. Bear rarely sees the need to have his protagonists stop and show us the wonder. Instead, Teacher and co move through a world largely made up of claustrophobic spaces where, more often than not, danger lurks.

The overall effect is of hard space fiction reduced to just a few of its essential constituent parts. But the key word here is essential. Rather as a folk song played simply can carry an almighty emotional wallop, Bear’s book is all the more powerful because he’s removed various bits of hard SF twiddly ornamentation that, it turns out, really don’t much matter all that much.