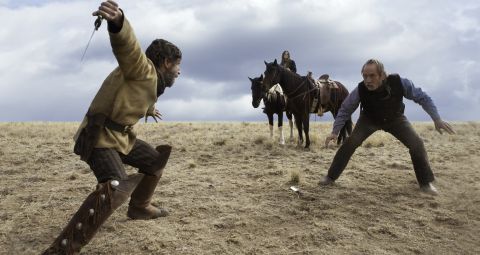 Frontier and back again

Outside of Clint Eastwood, there probably isn’t an actor/director working today who understands the rhythms of the Old West better than Tommy Lee Jones. From his work in TV mini-series Lonesome Dove to films like The Missing to his self-directed television movie The Good Old Boys, the craggy-faced Texan looks like he was born and raised in the 1800s. So it’s enticing to see him return to the director’s chair with The Homesman, a film that puts a fresh, female spin on the western.

While most horse operas concentrate on the pioneers who head west to settle, The Homesman goes in the opposite direction, quite literally. Hilary Swank plays Mary Bee Cuddy, a devout spinster living in the Nebraska Territories who undertakes a fraught mission in the name of the Good Book: to transport three women back east to Iowa, where a Methodist minister’s wife (Meryl Streep) awaits them. The reason? Each has parted company from her sanity.

It’s little wonder this trio has spiralled into madness. Arabella (Streep’s daughter Grace Gummer) lost three kids to diphtheria; the unhinged Theoline (Miranda Otto) flushed her babe-in-arms down the outside toilet; while Gro (Sonja Richter) seems demonically possessed. Not exactly the brightest of company, you might say, and the reason no man in Cuddy’s town wants to transport this particular cargo.

Fortunately, Cuddy encounters Jones’ George Briggs – an army deserter of ill repute who is about to get hanged when she saves him. In return, he must accompany her and the three shrieking women across the plains to Iowa. The prim Mary Bee and the boozy George make for the oddest of couples; though with the posse encountering everyone from hostile Native Americans to a foppish James Spader, they’re not the only oddity.

Jones’ first feature film as director since his sublime, Peckinpah-inspired The Three Burials Of Melquiades Estrada (2005), The Homesman is not easy, and rarely flinches in its harshness. Enhancing the mood is the barren landscape, far removed from the lush vistas seen in Golden Age Hollywood westerns. Despite fine support (John Lithgow and Tim Blake Nelson also appear), it’s the two leads who (unsurprisingly) make the biggest impression. Swank’s performance is every bit as potent as her Oscar-winning turns, but it’s Jones who takes top honours, as a rascal who finds a spark of decency within.