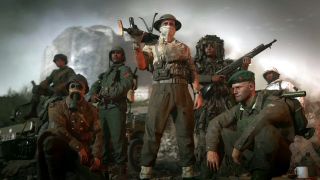 The Call of Duty WW2 beta is almost ready to begin. Are you ready to honor the annual tradition of a weekend full of blasting fools and contributing valuable data for Call of Duty developers ahead of launch? Don't worry if you're out of the loop, I've got all the info you need to make your beta experience go as smoothly as possible right here.

When will the Call of Duty WW2 beta begin?

There will be two weekend-long sessions for the Call of Duty WW2 beta, the first of which will be exclusive to PS4 players and the second of which will open up for the Xbox One crowd as well (no PC beta is currently planned). Here are the start times for both.

When will the Call of Duty WW2 beta end?

The semi-historical fun can't last forever. Here's when both beta sessions will conclude.

How can I play the Call of Duty WW2 beta?

You need to pre-order Call of Duty WW2 then register the code you get on the official site for a guaranteed slot. You might also be able to get a code via a giveaway or something, but Activision says it doesn't plan to have free days for all comers. You'll need Xbox Live Gold to play the beta on Xbox One, but you won't need PS Plus to play on PS4 (in most countries).

What's included in the Call of Duty WW2 beta?

Beta players will be able to try out several different competitive multiplayer options, including the multiple-objective-spanning War Mode. Team Deathmatch, Domination, and Hardpoint will also be available for testing with a limited selection of weapons and scorestreaks. No single-player campaign or Nazi Zombies content will be included in the beta.

Can I pre-load the Call of Duty WW2 beta?

How much space will I need for the Call of Duty WW2 beta?

The beta client will take up about 17GB of space, according to the official FAQ.

Does the Call of Duty WW2 beta have any special rewards?

None of your XP or anything like that will carry over into the full game. But you will get a nice little care package with a special helmet, calling card, and emblem once Call of Duty WW2 comes out in November.

Reminder: Participate in the #WWIIBeta and get the exclusive MP Private Beta Combat Pack on Nov. 3. https://t.co/bunGV8VoU0 pic.twitter.com/htsD0YtYHvAugust 22, 2017