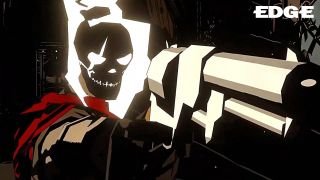 Each new descent into West Of Dead's underworld begins in the same place: a dusty Old West saloon, upright piano in the corner, a half-finished game of Texas Hold 'Em laid out on a card table. You'll return here again and again, having mistimed a dodge or lingered out of cover a second too long. You'll nod to the waistcoated barkeep, pushing grime around the same glass into eternity, then head out through those swinging saloon doors and into a freshly-baked labyrinth of rooms, all of them dressed for a shootout.

As well as a fistful of enemies, there are two elements that pretty much all of these rooms have in common: a smattering of conveniently waist-height tombs to take cover behind, and a couple of lanterns that can be kindled to throw light into the room's dark corners. From these elements, you can discern pretty much everything you need to know about West Of Dead, right back to its origins as a pair of prototypes, one made by each of developer Upstream Arcade's co-founders.

"What we always do at the start of a project is we prototype – we prototype quite ruthlessly," head of code and design Adam Langridge tells us. "This is something that I learned from my time in R&D at Lionhead. We would start with a feeling that we wanted to explore, and we'd box prototype it." In this case, the feeling in question was that of a gunfight in a Western, "with our slightly more macabre and fluid take to it."

So Langridge worked up a simplified sketch of how shootouts would work, applying many of the principles he'd helped develop for Fable II's so-called 'cinematic combat' – a one-button system that leveraged camera angles, dynamic music and the era's obligatory bullet time to make its mechanically simple fights feel more exciting. Playing West Of Dead, there are plenty of little flourishes where this section of Langridge's CV really shines through.

Dive clear of an incoming shot just in time and the game will drop into slow motion for a second, letting you feel the bullet whizz past your ear. Hit the dodge button and your skull-headed cowboy might skid into cover like he's making a slide tackle through deep mud, or leap across the top of a tomb like it's the bonnet of a '69 Dodge Charger. Safely in cover, the UI shows your guns' chambers spinning as, one by one, more bullets are loaded in.

That's one half of what makes West Of Dead distinctive. The other comes from that second prototype, handled by the studio's other co-founder, Imkan Hayati – another ex-Lionhead developer, here in charge of design and art. His prototype was a lighting system which could feed directly into combat, and playing the demo now, it's hard to miss. At least in part because the results will be briefly burnt onto your retinas.

Get close to a lantern, hit the ignite button, and it'll send out a flare that's visually – and literally – stunning. Not only does it reveal more of the room, including foes who were previously hidden, it dazes any standing nearby. The idea is to push players out of their comfort zones and into the centre of each room, forcing them to play the game as what Langridge calls a "360° cover shooter."

In the moment, that means cowering behind cover, cramming bullets into your six- shooter in the knowledge there's only a second or two until this bulwark crumbles under fire, then darting for the next as you empty both chambers. That saloon spawn point might be the one place you don't have a shootout in West Of Dead, but every single encounter feels like a classic Western bar-room brawl. The only thing that's missing is a button for breaking a chair across someone's back.