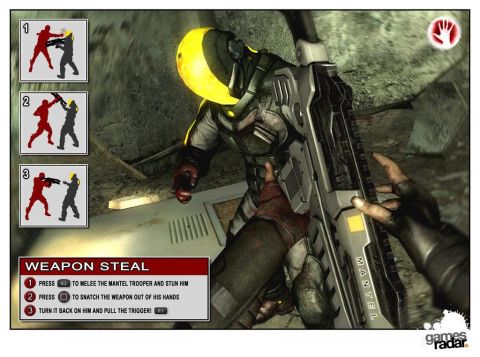 After five years of hype, speculation and delay, Ubisoft’s Haze breaks cover - and despite being developed by Free Radical, the team behind the excellent TimeSplitters 2 on PS2 - it fails to better UT3, Resistance and CoD4. Haze looks poor, lacks set-pieces and feels like a novel idea that missed its window of opportunity, frayed by the requests of nervous Brand Managers and cruel demands of next-gen development.

Haze’s fall is, in part, amplified by our heightened expectations, but by next-gen standards, it looks undeniable shabby. While we’re impressed by the scale of the environments (and the absence of loading times), they’re populated by uninspiring terrain and objects. The trees look like they’re made from cardboard, the flat-textured interiors are poor and the pop-up that sees a soldier’s armor disappear when you nudge the left stick toward or away from them is embarrassing. It’s not even on par with Half-Life 2 from The Orange Box, and that was originally made in 2004. To our eyes, the game looked better at E3 over two years ago - but maybe that’s the pace of change. Thankfully, Free Radical’s shooting mechanics are as tight as ever - so Haze, disappointing or not, retains focus.

Haze’s intriguing plot starts off with huge potential - Mantel troop Shane Carpenter (read: you) realizes that the war he’s fighting for is wrong and joins the opposition - it boils down to a predictable twist and an unfulfilling climax. You see, as a Mantel troop you get some lovely little effects when you’re all doped up on a special drug called Nectar. This is what makes the Mantel soldiers tick and gives them the effects of being invincible while also hiding the horrors of war (dead bodies disappear when you’re playing this way).

Squeeze L2 and you’ll send a dose coursing through your veins, which will make you temporarily quicker and more able to pick out camouflaged enemies by highlighting them, and if you click R3 to look down your gun’s sight you’ll zoom in even further. But these neat tricks are taken away within the first hour - far too early, before you get a chance to become really addicted to them - and from then on you switch factions and fight alongside the rebels and their charisma vacuum of a leader, Merino. What you’re left with is a run-of-the-mill shooter with limited originality and a lack of weaponry.