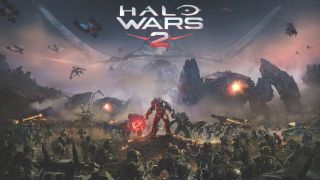 Like getting a Gamerscore of a million or winning the lottery, it used to be just a crazy dream to imagine real-time strategy working on consoles. Until 2009’s Halo Wars. With its smooth controls designed completely around the Xbox 360 pad, it’s still the most successful console RTS ever. But Halo Wars 2 has even bigger ambitions. 343 Industries and Creative Assembly want to get non-RTS fans playing.

“Halo Wars 2 is the RTS for everyone,” claims Dan Ayoub, studio head of strategy games at 343, and a man who has taken on a Herculean task. “I grew up playing RTSes on PC. How do we get more people to play this genre that we love? There’s so much magic with RTS and we really want to bring that to everybody.”

Graeme Jennings, Halo Wars 2’s executive producer, says the first step to getting more Halo fans into the RTS mindset is to make it feel categorically part of the wider universe. “One thing we worked on was to contextualise every building we bring in, so we made it so the firebase [the heart of a UNSC base] is dropped by Pelican dropships. Hellbringers are recognisable to fans but are new for Halo Wars 2, useless against air but good at clearing out groups of infantry units. Everything’s contextualised within the universe.”

Ayoub tells us that Halo Wars 2 also has a stronger action drive. “You’ll see us turning Halo Wars into an action RTS. Lots of very cool explosions really bring the battleground to life.” Some juicy explosion effects got a good response in the beta, but our first taste wasn’t a huge departure from the original. Just how reflective is the beta of the final game? “It was a true development beta, a snapshot of where we are today,” explains Ayoub. “We’d rather put that out there now and get feedback. A demo beta will come closer to launch.”

If the goal is to make an RTS that’s accessible to everyone, why include settlement building and resource management? Are they not tempted to just give us two armies of classic Halo foes to throw at each other? “I feel like you and I are going to have good conversations in the coming months!” says Ayoub, hinting we might be close to the truth of some unannounced modes. “Where we’re aiming to push the genre forward is making something that everyone can jump in and play. You’re going to see some other modes which completely change things. It’s a different way to play, while still being an RTS.

“In real-time strategy games there are defined mechanics for resource collection and building dependencies. To try and make it more accessible, you tweak, remove and refine to make it faster. That’s what’s happening at the dev studio and as we talk more about multiplayer you’re going to see different takes on how you shake that recipe up.” So don’t be put off by the RTS label if you’re a die-hard Halo fan. 343 and Creative Assembly’s strategy might just convert you yet. Halo Wars 2 will fill your Xbox One with microscopic carnage in February 2017.

Former editor of Official Nintendo Magazine and Official Xbox Magazine. Not as fickle as that makes me sound.
See comments